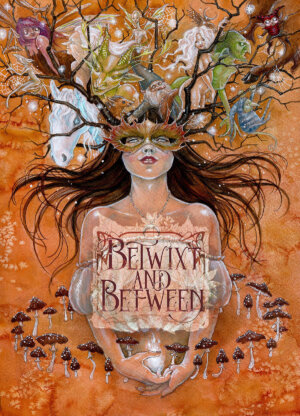 A new adventure game is on the horizon from All or None Games. In Betwixt and Between, designed by Tobias Hall, players take on the roles of mystics in a land inspired by European folklore as each aims to become the most learned. The game is for one to four players, ages 14+, plays in 90 to 120 minutes, and will carry an MSRP of approximately $54.99 when it arrives later this year.

You’ve finally found a way in to the home of the spirits and the fae, the Betwixt and Between, a tangled and uncharted web of strange places where most peculiar creatures dwell. Be wary — this land is steeped in ancient magic, and you’re far from alone in here…

Betwixt and Between is a strategic adventure board game for 1-4 players, mixing eerie European folklore with magical creativity and euro-inspired mechanisms.

In the game, you take on the role of mystics who have found their way into this strange land to explore and harness its magical essence. Throughout the game, you will unfold your mystic’s story by drafting exploration cards that determine what you discover and might encounter. You must cleverly combine card placement with character movement to create dynamic combinations in order to interact with the otherworldly beings and absorb magic. You build upon your magic weave to uphold spells that evolve your mystic with new abilities and points.

Only the most cunning and skilled mystic wins the game!

Tags
All or None Games Betwixt and Between Tobias Hall