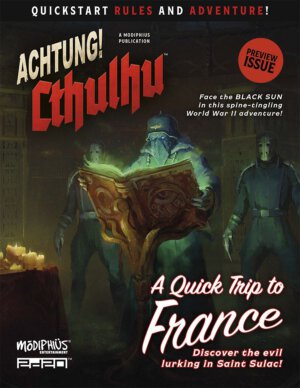 Modiphius Entertainment has released a free quickstart for the upcoming 2D20 edition of Achtung! Cthulhu. Engage in two fisted action facing off against both the forces of the Axis and the Cthulhu Mythos during the height of World War II. The 48 page quickstart PDF is absolutely free at DriveThruRPG.

Dare you face the terror lurking at the heart of Saint Sulac? Join a band of intrepid Allied agents as they investigate the mystery gripping this obscure corner of France. Who are the mysterious Nazi Black Sun? Why have they overrun this sleepy French village? What are they doing with the villagers they imprison in the mysterious ancient chateau at its centre?

• An exciting adventure A Quick Trip to France to begin your journey into The Secret War!

• Five pre-generated characters so you can pick up and play the game straight away.

• Battle the forces of the Nazi Occult and save mankind from the malign power of the Mythos!

Sign up on the Achtung! Cthulhu 2d20 Page to learn more including full plans for pre-order launch!