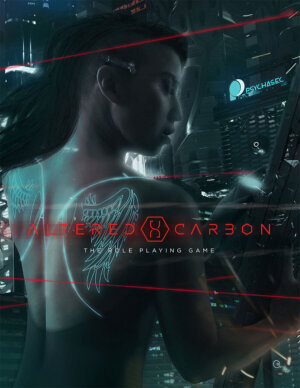 Hunters Entertainment and Renegade Game Studios have released the Altered Carbon roleplaying game. The game is based on the Netflix series as players characters will jump into a cyberpunk future when minds can be implanted in any body and consciousness can exist across millennia. The 328 page corebook can be preordered for $50.00,with expected release in January, or score the PDF right now at DriveThruRPG for $24.99.

The human mind is nothing more than digital code –Digital Human Freight– saved and stored in a Cortical Stack, advanced technology that allows you to “re-sleeve” your entire consciousness into a new body.

In the official Altered Carbon role playing game based on the hit Netflix series, wear any body you can afford, transmit your mind across the cosmos in an instant, and, if you’ve got the credits and political cachet, re-sleeve time and again for centuries, accumulating enough wealth and power over the millennia to become the societal equivalent of an immortal god.

With the prize of immortality at your fingers, the question is, what price will you pay for it? What stories will you tell?