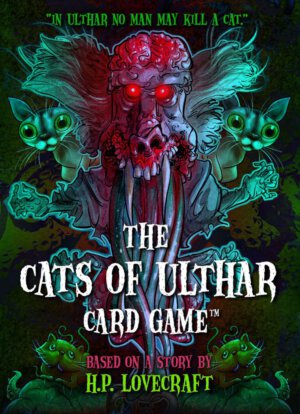 A unique looking two player card game based on an H.P. Lovecraft tale is now in it’s final week on Kickstarter for Gilgamesh Games. The Cats of Ulthar pits dueling sorcerers against each other while also attempting to use our feline friends to take down the evil Cotter and his wife. The game is for two players, ages 13+, plays in 15-30 minutes, and is over 300% funded. You can reserve a copy of the game for a $16.00 pledge through November 1st. Delivery is expected in May of next year.

We’re bringing the H.P. Lovecraft tale, “The Cats of Ulthar” into the gaming universe! This quick play, two-player card game has magic, ancient elder gods, and of course, CATS of all kinds. Got fifteen minutes to weave spells, collect feline friends, and avoid summoning the wrath of Lovecraft-inspired Egyptian gods? Then step right up to learn more…

Based off the story by H.P. Lovecraft, The Cats of Ulthar is a two player card game. Each player attempts to surround their spellcaster card with three cats in matching order, while at the same time, attempting to attack the other player’s cats with magic spell cards. Once each player gets a turn, then the villains of the game or, the “Cotter + Wife” get a turn as well! These cards will attack cats from either opponent.

If your opponent attacks you with a deadly spell card and you can’t deflect it with a magic card, then your cat is killed. However, that means your opponent has summoned the wrath of the “Ancient Elder Gods” and must pull a card from their deck, then follow what the card says. This is never good.

Once your spellcaster is completely surrounded on three sides with the proper cat cards, thrown down a “Kill” card on the “Cotter + Wife” card to win the game!