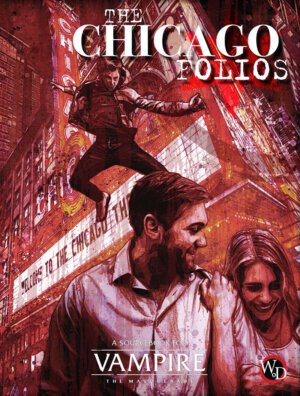 A new release for Vampire The Masquerade 5E has arrived from Onyx Path Publishing. The Chicago Folios provide a slew of adventure hooks and detailed Kindred sure to spice up any VtM chronicle. The 177 page PDF is available from DriveThruRPG for $14.99.

A city as large as Chicago requires more than a surface study to find out its secrets.

Princes, Primogen, and all those other Kindred with titles and notoriety may claim to uphold the Masquerade, but they delight in the undead fame and status. There are others, well-hidden, with deeper secrets, darker ambitions, and elusive sects buried in Chicago and its surrounding towns and cities.

Chicago contains sufficient stories and mysteries to entice any neonate and bewitch any Kindred scholar. From accounts of clandestine meetings to encounters with horrific beasts, these folios provide a deeper insight into the city’s darkest tales.

The Chicago Folios put any vampire reading them in danger, but through that danger, the possibility of enlightenment.

The Chicago Folios include: