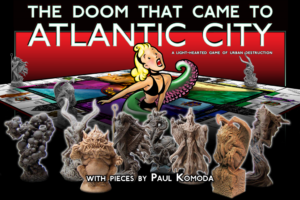 Are you prepared to become The Doom that Came to Atlantic City?

Once people came to Atlantic City to seek their fortune, to construct fine hotels and establish powerful monopolies. But you’re not here to build, you’ve come to destroy!

You’re one of the Great Old Ones – beings of ancient and eldritch power. Cosmic forces have held you at bay for untold aeons, but at last the stars are right and your maniacal cult has called you to this benighted place. Once you regain your full powers, you will unleash your Doom upon the world!

There’s only one problem: you’re not alone. The other Great Old Ones are here as well, and your rivals are determined to steal your cultists and snatch victory from your flabby claws! It’s a race to the ultimate finish as you crush houses, smash holes in reality, and fight to call down The Doom That Came To Atlantic City!

The Doom is the brainchild of artist Lee Moyer, inspired by his love of the Cthulhu Mythos and disdain for a certain board game that shall not be named. Game designer Keith Baker is best known for the Origins Award winning card game Gloom, and he brings the same dark sense of humor to the devastation of Atlantic City.

Keith and Lee enlisted the help of their friend Paul Komoda to design some of the more eldritch visual elements of the game. Paul’s talents can be seen on-screen in the prequel to John Carpenter’s The Thing and Cabin In The Woods. He brings that vision and long association with H. R. Giger to his designs of the Great Old Ones.

The game bears a distinct resemblance to Monopoly, but instead of playing a puny mortal building a city or closing gates to save the world, you play one of the Great Old Ones, seeking to tear down the city, open gates, and destroy the world. The game will come with eight highly detailed plastic figures of the Great Old Ones, so that you can be your favorite.

The Doom that came to Atlantic City is on Kickstarter right now until June 6th. With a pledge of only $75.00 you can get a copy of the game with the figures in pewter.

The project has already met its funding goal, so this game will be published!

Anno 1800: The Board Game | Unboxing and First Look

Sigil & Shadow | Review and Page Through