Modiphius Entertainment and Bethesda Softworks have released the first titles in the The Elder Scrolls: Call to Arms miniatures game and two of them are available for free in PDF at DriveThruRPG. Available at absolutely no charge are the Call to Arms Core Rulebook and free quickstart/scenario book Escape from Helgen as well as print and play dice. The new quest book is also available for $5.00.

Today we’re delighted to announce the release of the Elder Scrolls Call to Arms books in PDF! 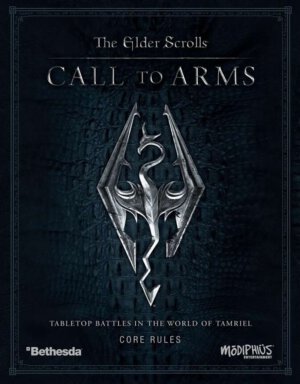 Welcome to Tamriel – a realm of adventure and wonder. Where danger lies around every corner and where fame and fortune await the bold. It is a realm you can enter today, if you have the courage to answer the Call to Arms!

The Elder Scrolls: Call to Arms is a tabletop wargame set against the epic, sprawling backdrop of Tamriel. From the teeming cities of Cyrodiil to the towering mountains of Skyrim, across the ash-plains of Morrowind, and through the steaming swamps of Black Marsh, you must lead your Party of bold warriors on the path to glory. In this game, you must select a mighty champion to lead your Party, surrounding them with heroes and staunch followers. Players can take on quests, unearth magical artifacts, and fight roaming monsters as they do battle against their opponent, using a combination of strength, stealth and magic to win the day. Call to Arms is a simple game to learn, but a challenge to master; your Party can be assembled in an almost endless variety of ways, each unlocking new tactics and abilities with which to test your skill as a commander and challenge your enemies.

Whether exploring trap-filled dungeons, or battling in some windswept wilderness, Tamriel is yours to explore – or exploit – as you see fit, building your forces to take on all comers. This rich setting gives players the opportunity for a vast array of different game types and play styles, as well as collecting and modeling highly detailed, characterful miniatures from The Elder Scrolls universe. 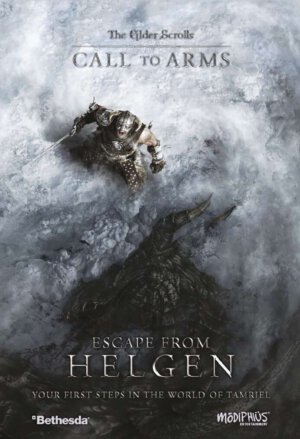 The Elder Scrolls Call to Arms Escape From Helgen

This FREE PDF contains basic tutorials for those who are new to tabletop wargames. The Rulebook contains the full rules, while the Quest Book contains scenarios that structure your gaming experience. This booklet leaves out the full tactical complexity of the game in order to ease you into the adventure, one mail-shod step at a time.

Experienced tabletop wargamers may prefer to dive straight into the Rulebook, whereas brand new players are encouraged to start here, learning the game step-by-
step. At each stage, once you feel you’ve got the idea, feel free to move on to the next tutorial.

The Elder Scrolls: Call to Arms is played by moving and exploring with the models under your control, and attacking and defending against the enemy. As you play, you’ll be looking to complete Quests and claim battlefield Objectives in order to score points and assure victory. 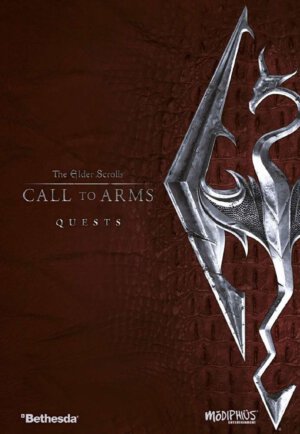 Welcome to Tamriel – a realm of adventure and wonder. Where danger lies around every corner and where fame and fortune await the bold. It is a realm you can enter today, if you have the courage to answer the Call to Arms!

This Quest Book is the gateway to starting your adventure in Tamriel! It contains additional rules to those found in the Rulebook. Here you will learn about the different Game Modes, where you can battle with your friends or take on the wilds of Tamriel alone. Most importantly, you will find numerous ready-to-play scenarios, providing tactical challenges and narrative adventure for your games!

We hope you enjoy these first Calls to Arms rules releases and for pre-orders on the physical products including the Core Rules Boxed Sets, Imperials and Stormcloaks miniatures sets, and a wealth of terrain features, be sure to check out the Elder Scrolls Call to Arms Collection.