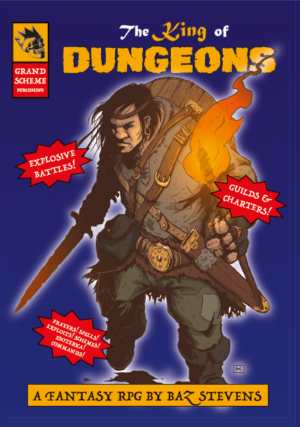 An interesting looking new fantasy RPG, written with a bit of a conversational tone, has arrived from Grand Scheme Publishing. The King of Dungeons is presented with the assumption you’re familiar with roleplaying games and promises new wrinkles in a setting where adventuring is an actual career path. The 138 page PDF is available at DriveThruRPG for $10.00.

The King of Dungeons is a new fantasy role playing game, where you and your friends get together and make stuff up about spells, swords and shenanigans.

I’m going to make a couple of assumptions here. You know what an RPG is. This isn’t exactly your first rodeo right? Also, I’m reasonably sure that you’re also a GM, which means you know how books like this work already. All of which is good. I’ve written King of Dungeons in a pretty conversational tone. If I’ve got it right, then this should feel like one gamer talking to another. Rather than hold your hand through basic roleplaying procedures that you have seen umpteen times in the hoary old ‘What is a Role Playing Game?’ section that you probably just skimmed anyway, I’m just going to pitch this my way, to you, GM to GM.

I’ve been gaming since the days of yore (when everything was black and white, and you had to colour in your own dice with crayons). I’ve spent most of that time searching for the perfect dragony/dungeony-like experience. I’ve read so many other people’s iterations on the classics I thought it was time to brew my own. I call it a remix, or a cover version.

The inspirations and influences are clear: it is dungeoning and dragoning through a modern lens of systems, married to a mind-set of making it up as we go along. It’s not from any particular school, it’s just the way I like to play my games, hopefully presented with some passion and a sense of humour.

I’m really bolting together three elements of play. I like tactical, action-oriented combats. I like free-wheeling exploration and interaction in my games. And I wanted a reason for it all to hang together, based on the core premise of; what if professional adventuring was an actual thing in the setting?

I also wanted to have the chance to record my personal thinking on gaming ideas without having anyone answer me back.

The system chassis is the Archmage Engine, which you might know from The 13th Age Roleplaying Game. That itself is a blend of the world’s most popular roleplaying game and the more indie narrative sensibilities. It’s been simplified and stripped right back. I’ve added other bits and pieces from all over the gaming spectrum and my own brainium. The system is to 13th Age what Basic D&D was to AD&D; compatible, but stands up on it’s own.

The setting is implied. It’s heavily adventurer-centric. It’s actually more of an adventuring structure that you can drape over your own, or shop bought, setting of choice. Adventuring is a career, and after a while becomes its own raison d’être beyond simply killing monsters in ill-lit holes and absconding with their stuff.

How does this play with your current stuff? Awesomely. If you’re old school, then there might well be some bits you fancy nicking to liven up the downtime elements of your gaming. If you’re more new school then the more loosey-goosey soft-crunch might inspire you in some way. You can use all your old adventures as a skeleton for your sessions. For example, using the montage system, veteran gamers could drop the Tomb of Horrors into a session and have it done in one sitting. That would be cool right?