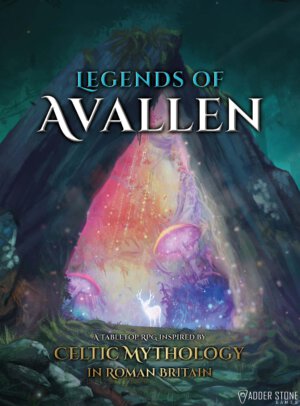 The hardcover edition of the Legends of Avallen roleplaying game has arrived from Modiphius Entertainment. The system utilizes a deck of cards for action resolution as the players are transported to an ancient Celtic themed land. The 244 page hardcover is available for preorder for an MSRP of $48.00. Copies will start shipping in mid-December.

“From that island at the end of the world, no soldier returned without tales of wonder. Walking forests, talking fae, enigmatic shapes half man and half beast; things that you ought not to believe unless you see them yourself.” —Kaato the Sage on the invasion of Avallen

Inspired by Celtic mythology in Roman Britain, Legends of Avallen is a roleplaying game that takes you to a mystical island occupied by faithless invaders. For now, peace has been called but it balances on a sword’s edge as all seek to tame the Otherworld—a parallel realm home to fae, demons, dragons, and gods.

On Avallen, the greatest legends rise from humble beginnings, and yours will be no different. The shepherd ordained as a Druid, the bard reborn as a Fae Touched, the thief who found glory as a Gladiator. What tales will be told of you? Will you mend the rifts between worlds, or delve into their depths for fame, fortune, and power?

Legends of Avallen is a complete tabletop roleplaying game in one incredibly illustrated 244-page hardback book.