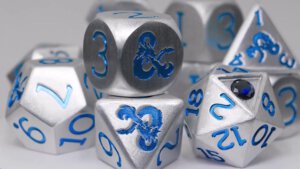 Wizards of the Coast has released a special limited edition dice set to mark both the 45th anniversary of Dungeons & Dragons as well as five years of the 5th edition of the venerable RPG. The D&D Sapphire Anniversary Dice Set contains eleven precision cut aluminum dice, a custom box and tray set, a certificate of authenticity, and more. The anniversary set is limited to 1,974 sets and carries an MSRP of $299.99.

It’s been five years since Dungeons & Dragons fifth edition launched, and the explosion of D&D’s popularity since then has been a wonder to behold! Now fans can celebrate D&D through the D&D Sapphire Anniversary Dice Set, available directly from Wizards of the Coast. The set commemorates both #5yearsof5e AND forty-five years since D&D’s first publication in 1974.

In honor of the original release year of Dungeons & Dragons, 1974 sets of this custom-crafted treasure will be available to the public for this special occasion.

“When the D&D team realized the sapphire is the traditional anniversary stone for both five years and forty-five years, and that adding a laboratory-created sapphire to a twenty-sided die wouldn’t jeopardize the integrity of a roll, we couldn’t pass up the chance to make something really cool to celebrate the milestones” said Nathan Stewart, VP of the D&D Franchise at Wizards of the Coast. “The team put together a fun product for our fans that includes art and newly updated stats for sapphire dragons, making these classic dragons ready for play in your next D&D session.”

Inside this collector’s set you’ll find: