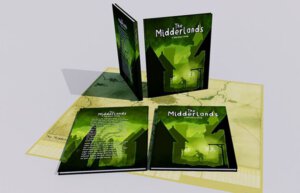 MonkeyBlood Design and Publishing and Necromancer Games are teaming to bring the popular fantasy setting The Midderlands to 5E through Kickstarter. The setting is quite original and a bit off the wall. I personally find it to be quite intriguing and well produced (check out my review here) and you can reserve the Midderlands in PDF for a $20.00 pledge or grab the hardcover and PDF for a $40.00 pledge through October 29th. Expected delivery is next March.

A green-hued, dark-fantasy setting and bestiary set in a twisted middle-England.

Situated in the middle of Havenland is an area known by the ancestors as the Middle Havenlands. They don’t use that name much anymore, preferring to talk lazily, and skip letters. In strange accents, often misheard and little understood by those outside of the central region – they call it ‘The Midderlands’, and themselves ‘Midfolk’ or ‘Midderlanders’.

Everywhere though, the Midderlands is tainted by a green-tinged menace that rises from ‘Middergloom’, the deep and mysterious realms beneath the surface. It affects nature and order. Sometimes subtly and sometimes catastrophically. Middergloom is often described as hell bathed in green fire and flames. Green-tinged, viscid slime; noxious, acrid vapours, and miasmas of hopelessness creep upwards from below. Amongst them, viridian-coloured demons, lime-green tentacles and other malachite horrors claw their way to the surface to wreak havoc. The Lords of the land are always working to keep things at bay. They fight endlessly as if holding back a torrent of despair.

Things stir in this viridian-hued landscape. Evil eyes blink and watch. Teeth and claws scratch and sharpen. Gaping maws slobber and drool.
All is not content in the Midderlands.

The Midderlands is an award-winning, weird world-setting for fifth edition (D&D). It’s late middle ages/Tudor England seen through a looking glass, filled with strange creatures, insidious threats, and the color green. It’s edgy, it’s twisted, and the first thing you should expect is the last thing you’d expect. Looking for a 5e setting completely different from anything you’ve seen before? You’ve found it – now let’s see if you can survive it…