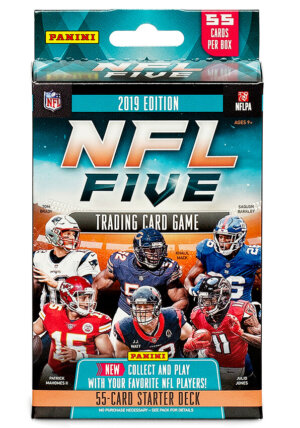 With the NFL kicking off the new season tonight, it’s the perfect time to look at what’s out there as far as bringing the gridiron to your table top. Arriving next month is NFL Five from Panini America to scratch any trading card game itch you may have. Each Starter Deck contains a 50-card, tournament-ready deck along with five foil, parallel cards and all the accessories you need to learn and play the game. Starter decks will carry an MSRP of $14.99 and boosters an MSRP of $3.99 when the game arrives October 4th.

Welcome to the NFL Five Trading Card Game, in which you can collect and play with your favorite NFL stars and rookies! Unlike previous sports TCGs, the NFL Five game brings traditional trading-card elements to the gridiron. Field your best 10 players (5 offense and 5 defense), and battle it out with your opponent to see who can score the most points.

Move up and down the field by calling plays face-down. After each player has called a play, reveal them and determine if the play was successful or stopped (stopped if the defense calls the exact same play as the offense). Once a play is successful, you can use player abilities and other card effects before gaining yardage. Each play takes time off the clock until it reaches 0, which ends the half. Play two halves of football, and the winner is the player who scored the most points!

Mix and match from all 32 NFL franchises, with eight players available per team.
Look for hard-to-find Epic and Legendary cards along with foil parallels of the full set.
The entire set comprises 316 cards, including 256 Players, 20 Action Cards, and 40 Plays. 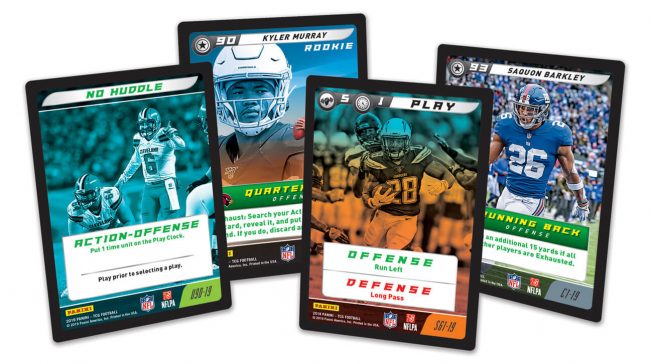