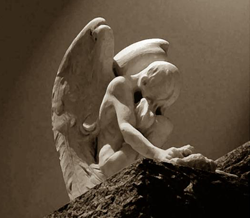 It is with heavy heart that I share the news of the passing of the gaming community’s great friend, Tom Vasel’s infant son Jack. I learned the news earlier today when Elliott called to give me an update. We had known for a while that things weren’t looking very good never the less this still came to us as a stunning blow! I know we were hoping and praying that little Jack would continue to hang in there and keep fighting.

I wanted to say a big thanks to the boardgaming community at this point.

From the hundreds of cards we received, to the emails, to those who donated money or gifts (love the little meeple hat!), I say a very huge thank you!

I won’t deny that this is hard – harder than anything I’ve gone through before. I’m sure it will get easier as time goes by, but Jack was my son – and it’s going to hurt for a while. We don’t cry for him! We cry for us, we selfishly wanted him for much more two months.

But two months was pretty good – more than many people have. So from all of us, to all of you – thank you guys for your care and consideration. Most of you don’t know us from Adam, but you wrote and prayed anyway.

I’ll likely take a week of hiatus from posting reviews, but life goes on. We’ll never forget Jack, and we won’t forget you guys for your support. I apologize for all the emails I haven’t answered – give me some time, we just want to rest a while. I’ll post here when I know more about a memorial service, or whatever we do.

There is a memorial service for Jack on Saturday, January 29th at 2 PM at

Everyone is invited. Graveside service and reception to follow.

Like the great majority of gamers, we’ve never had an opportunity to meet Tom in person yet through all of his contributions to the hobby (Dice Tower video reviews, podcasts, and written work) I feel as if we’ve come to know Tom and his family almost as extended members of our very own families. And, as always in sorrowful times like this, family is always there to lend solace and support. Our hearts go out to the Vasel’s and I’m sure I speak for the community by saying we’re here for them in whatever capacity is needed.