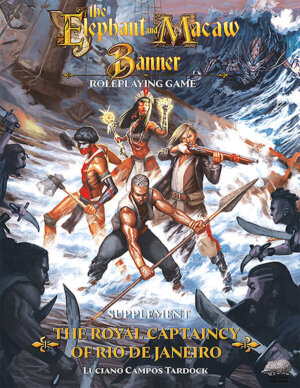 The Brazilian fantasy RPG The Elephant & Macaw Banner has a new sourcebook and adventure available in PDF from Porcupine Publishing. The Royal Captaincy of Rio de Janeiro contains all you’ll need to know about the titular city as well as a full adventure, The Restoration of France Antarctique. The 94 page PDF is available at DriveThruRPG for $11.99.

This PDF contains 95 pages, including information on colonial Rio de Janeiro in the EAMB setting, monsters and magic of the region, PLUS a grand adventure, ‘The Restoration of France Antarctique.’

This adventure is designed for The Elephant & Macaw Banner RPG and is suitable for any tabletop roleplaying game that includes, or can accommodate:

1| THE ROYAL CAPTAINCY OF RIO DE JANEIRO: A REPORT

Settlements
The peoples
Expeditions into the interior

3|MONSTERS & MAGIC OF THE CAPTAINCY

4 | ADVENTURE IN THE CAPTAINCY

The Restoration of France Antarctique!
Ideas for other adventures in the Royal Captaincy of Rio de Janeiro

The Elephant & Macaw Banner is an award-winning fiction series that tells the adventures of the Dutchman Gerard van Oost and the Yoruba Oludara during their travels through a fantastic version of sixteenth-century Brazil. These stories, based on Brazilian history and folklore, have been enjoyed by readers around the world.

Now it’s time to immerse yourself in this world of Brazilian fantasy, a setting full of adventure, magic and monsters, in which you will find endless opportunity to invent new stories. Create your own heroes and have your own adventures in this magical world!