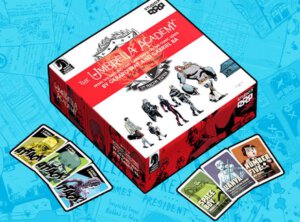 Dark Horse Comics and Studio71 Games have teamed up to bring a Kickstarter project, based on The Umbrella Academy cult comic (and hit Netflix series), to your game table. The Umbrella Academy Game places players in the roles of the heroic Hargreeves family as they battle villains and family dysfunction each turn. The project is over 500% funded and you can reserve a copy of the standard edition for a $25.00 pledge, or the deluxe edition for a $45.00 pledge through August 29th. Expected delivery of the game is this December.

Based on the comic of the same name, The Umbrella Academy Game brings the captivating world that Gerard Way and Gabriel Bá created to your tabletop and lets you play as the seven siblings, who possess unusual powers, in a fun and exciting card game. The Umbrella Academy has taken the world by storm since it first started as a comic book, then through its adaptation as a Netflix series, which has its Season 2 premiere on July 31, and now its latest extension brings the fantastically flawed Hargreeves family into your home in a brand new way.

Players will pick their favorite family member to act as their Hero Card and put a Life Card underneath it. Each player gets 5 Hero Attack Cards. Shuffle up the Villain Cards and put them in the middle of the play area. Put the deck of Villain Attack Cards and the deck of Dysfunctional Family Cards next to the Villain Cards. Put the final Battle Cards to the Side. The first player takes the turn marker card and turns over the top Dysfunctional Family Card, which affects this round of the game. Lay out the number of Villain Attack Cards as shown on the first Villain Card. Now each player takes their turn beginning with the player with the marker card. Players pick a card from their hand to: Attack a Villain, Heal your hero, or play a Hero Story Card. Once all the Villain Attack Cards have a Hero Attack Card played under them, players can use their Hero’s Special Ability. Game play proceeds until all the villains have been defeated (or no family members are alive). Then it’s time for the final battle. The defeated villains come back to life and players attack!

The game takes approximately 20 minutes to play and is recommended for participants aged 12+ with 1-6 players per game. Fans can expect the game later this year, and next year it will be distributed to retail stores.