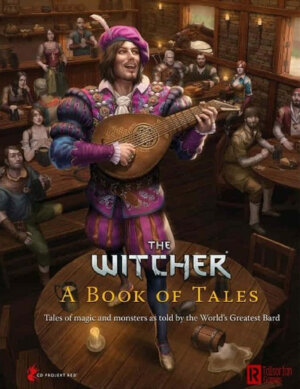 R. Talsorian Games will be releasing a new adventure supplement for The Witcher RPG next month. The Witcher: A Book of Tales contains six adventures filled with new NPCs, monsters, locations, and more. The book should arrive in July carrying an MSRP of $30.00.

Adventure across the world of The Witcher, uncovering its secrets, slaying its monsters, and bringing its stories to life, as entirely truthfully recollected by the famed bard Dandelion. In this book, you’ll travel from the cold mountains of Kovir to the wine soaked region of Toussaint in Nilfgaard, meeting interesting characters along the way, with intrigue around every corner.

Book of Tales is a supplement for The Witcher RPG which gives you six adventures that span the Continent, complete with new monsters, player content, and maps compiled into a larger campaign.

• 6 Adventures – Experience escapades across the Continent, including a murder mystery in the heart of Mount Carbon, pulse-pounding combat in the Claremont arenas, and investigations in the mist-shrouded Alderwood.

• A Connected Campaign – Take your players on a journey across the Continent by weaving all six adventures into a country-hopping trek.

A Tome of Chaos has Arrived for The Witcher Roleplaying Game