Stronghold Games has announced pre-orders have now begun for Among the Stars (already burning up the charts in Europe), Diamonds, and Space Cadets: Dice Duel – Die Fighter. These titles are set for a Gen Con release and you can not only be the first on your block to get your hands on these piping hot titles but also save 30% off MSRP while you’re at it.

You can learn much more about these three titles by giving a listen to my recent interview with Stronghold’s Stephen Buonocore. 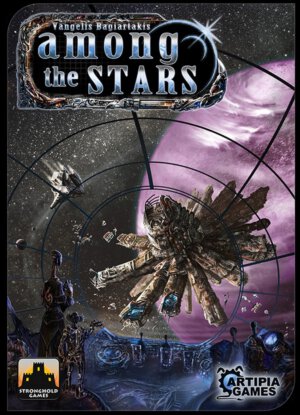 Among the Stars takes place in a war-ravaged galaxy where the warring alien races have declared peace in the wake of a threat with the potential to destroy them all. An Alliance is established to build space stations throughout the galaxy in order to promote trade among the races, strengthen diplomatic relations, and defend against this impending threat.

Each player takes the role of one of those races trying to build the greatest space station. Through card drafting, the players select locations, and use these to build their station, scoring victory points based on the placement.

The construction lasts four years, and alien race with the most points at the end wins.

Among the Stars uses the “7 Wonders”-style card-drafting mechanic. However, cards that are drafted are placed in front of you to build your space station, and the placement of these location cards in the space station is critically important to scoring points. The spatial relationships among the cards are important for winning the game.

Among The Stars is a rich thematic card drafting game. Stronghold Games will be expanding this game with two expansions coming later this year! 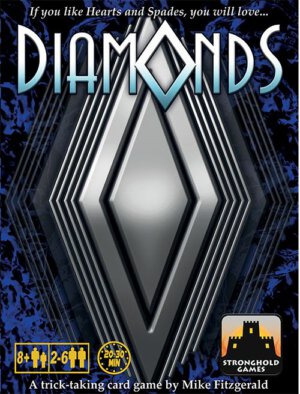 Diamonds is a trick-taking card game in which players collect Diamonds – not cards bearing that suit, mind you, but rather actual “Diamond Crystals” (acrylic crystals) included in the game.

What makes the game of Diamonds different from other trick-taking card games is that when you cannot follow suit you get a “Suit Action” based on what suit you do play. Suit Actions are also taken by the winner of each trick, as well as at the end of a full Round of play.

Suit Actions will enable players to take Diamond Crystals from the Supply, moving them to their Showroom (where they may score 1 point) or to their Vault (where they will score 2 points). The Vault is a secure area, but the Showroom is vulnerable to theft by the other players. Whoever has the most points in Diamond Crystals at the end of the game wins!

Diamonds is designed by the master of card games, Mike Fitzgerald. We are proud to make Mike’s game the first in the new “Pocket Line” for Stronghold Games. 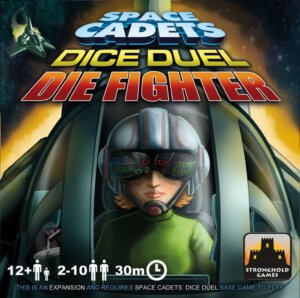 * Fighters are flown by a single person and are fast and maneuverable, but lack shields and can be easily destroyed. In “Carrier Strike”, suitable for 6-10 players, each team gets one original ship (now called a Capital Ship) and one Fighter. “Fighter Assault” has two Fighters trying to take out a single heavily armed capital ship and is designed for 4-6 players. Finally, “Fighter Duel” brings the Dice Duel experience to two players, as two fighters go head-to-head for a quick and intense battle.

* Experimental Equipment cards upgrade the capital ships with a variety of unique and powerful abilities. Through a draft mechanism, each side selects two upgrades and needs to tailor their strategy to take advantage of their strengths. The 27 cards include new weapons, enhancements to existing systems, new movement options, and more.