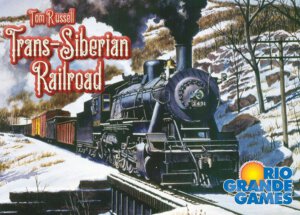 Rio Grande Games is publishing a new edition of the Tom Russell designed 18xx game, Trans-Siberian Railroad. The game places the players in the role of Russian railroad barons as they aim to expand their lines and their earnings while keeping the Tsar away from proceedings. Trans-Siberian Railroad is for three to five players, plays in 45-90 minutes, and will carry an MSRP of $39.99 when it arrives “soon.”

In the late 19th century, the Russian government commissioned a project to build a railroad that would connect Moscow in the west with Vladivostok in the east. You and your fellow players are buying shares of the railroads that will expand across Russia, attempting to enrich yourself along the way and not lose control of railroads to the Tsar!

Trans-Siberian Railroad — originally one of three titles in Winsome Games’ 2015 Essen Set — shares some similarities with older Winsome titles in which the rail network is already printed on the board and individual railroad companies purchase the links that are printed. Four companies (Red, Blue, Green, and Yellow) are active at the start of the game, with one share of each company auctioned to the players in that order to provide starting capital for those companies. The winner of each auction chooses an unoccupied link from Moscow to another city; each link has a value listed in it, and the railroad’s initial income is set to this value.

When the game ends, players sum the value of the stocks they hold in public railroads with any money they have on hand. The player with the most money wins.