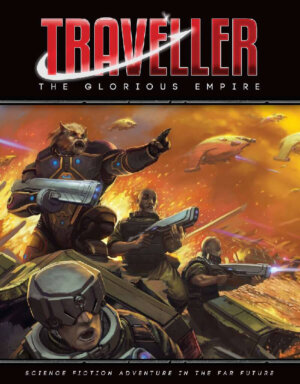 Mongoose Publishing has released a new supplement for the Traveller roleplaying game. The Glorious Empire features everything players and Game Masters will need to set adventures in a crumbling Aslan splinter state. The sourcebook is available as a 162 page PDF at DriveThruRPG for $29.99 or as a preorder hardcover for $49.99 at the Mongoose site.

The Glorious Empire is an Aslan splinter state in the Trojan Reach that engages in the forbidden practice of slavery. The Empire has spurned the Aslan custom of ritual warfare, insisting upon violent open war in all conflicts. Their borders have held strong for centuries… until now. Beset by enemies on all sides, the Empire is now collapsing rapidly and has lost one world after another. However, like a wounded and cornered predator, the Empire does not plan to go down without a fight. On worlds liberated by the Hierate, freed human slaves – the hisol’i – struggle to integrate into Aslan society. On the Empire’s remaining worlds, there are billions more waiting to be freed.

The Glorious Empire is a living region that will change dramatically over the course of a campaign. Wars will be fought, worlds will fall, and Travellers will directly influence, take part in, and decide the shape of things to come. This book includes tools and campaign directions for referees and Travellers to take an active part in the events that change an entire region of space right before their very eyes.

In this book you will find: