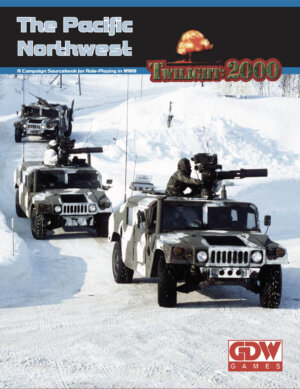 Game Designer’s Workshop has a new RPG supplement for Twilight 2000 available in PDF. The Pacific Northwest includes everything a gamemaster needs to bring the aftermath of the Twilight War to the titular region. The 112 page PDF is available at DriveThruRPG for $9.99.

The Pacific Northwest is a campaign setting sandbox for use with Twilight: 2000, GDW’s role-playing game of survival in a devastated world.  It details the geography and status of Washington, Oregon, Idaho, and British Columbia, previously touched on only briefly in sourcebooks and adventures.  The tools it gives referees and players to craft stories in this region include:

The Pacific Northwest aligns with the events of the timeline published in the first edition of Twilight: 2000.  It is fully compatible with the version 2.0 and 2.2 rules sets.