There’s loads of news about Signal Fire Studios today but rather than lump everything together I thought I’d keep the boxed game announcement separate from the RPG releases. It looks like Jamie Chambers and Digger Hayes are leaving behind the days of print and play, at Signal Fire Studios, and revealing boxed editions of previously available PnP games. Coming soon are Building an Elder God and Pantheon!

Have you ever wanted access forbidden knowledge to tap into the hidden secrets of the universe and the dark mysteries of the Great Old Ones? Of course you have! These secrets will allow you to grow you very own incarnation of a tentacled horror from beyond the veils of space and time. Oh, sure, some would call you “insane,” but who will be laughing when your new pet devours their home town?

Problem is, some of your research buddies have acquired the same dark knowledge as you and are working on growing their own monstrosities. No way do they get to steal your glory! You must ensure your beast is complete first—which is why you brought your trusty shotgun. And if your precious, slimy baby is injured you brought your travel copy of the Necronomicon as a little healing insurance. Do whatever it takes … for whoever’s first grows to completion wins … everything!

Building An Elder God is a casual card game of Lovecraftian construction for 2-5 players ages 10 and up. The rules are easy to learn and a typical game takes from 15-30 minutes, depending on the number of players. Build a Cthulhu-esque tentacled monstrosity to completion before the other players, using damage cards to blast your opponents’ creatures to slow down their progress so that you can win! Assuming there is no aversion to a little implied violence and the sight of ichor, this is appropriate for friends and families.

The suggested retail price will be $19.99 and scheduled for release in July. 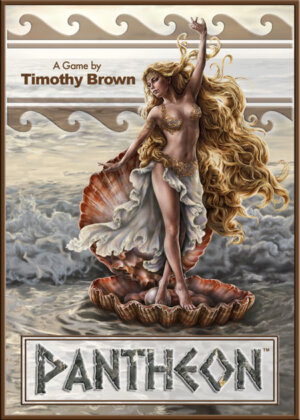 In the ancient world, civilizations struggle against their enemies using the strength of their numbers, the hardness of bronze and iron, and the powers granted to them by fickle gods. Plagues, famines, and fire are suffered or inflicted while soldiers march to war in the name of the deities they serve. Only the civilization with the strongest pantheon will prevail.

In Pantheon you start with a fledgling ancient culture. Grow your population, build temples, advance your civilization, and wage war on your enemies! There are many paths to victory, but when the game ends only the strongest pantheon will triumph. It features gods from ancient Greek, Norse, Egyptian, Chinese, and Indian mythology.

Pantheon is recommended for 2-5 players, ages 12 and up, for about 90 minutes of playtime.

Pantheon is expected to release in November, with a suggested retail price of $19.99.