There’s loads to be excited about from Paizo Inc in March 2020 and here’s a look at what’s in store for both Pathfinder and Starfinder. 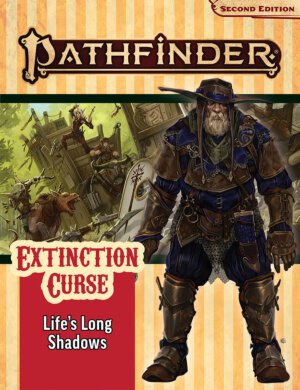 Fresh from their successes in Escadar, the heroes bring their traveling circus to the Isle of Kortos—the so-called Starstone Isle at the heart of the Inner Sea. As their circus tours the farming communities in the breadbasket known as the Swardlands, the heroes get a chance to explore the three aeon towers that impart enchanted bounty to the land. Yet all is not well in the Swardlands, as ecological damage and raiding beasts threaten the hardworking farmers and loggers. The heroes must overcome the aeon towers’ stony guardians, entrenched xulgath hordes, and a zealous dero murderer before they can confront the xulgaths’ alchemist leader and disrupt his disastrous scheme to use the aeon towers to bring ruin to everyone on the island!

“Life’s Long Shadows” is a Pathfinder adventure for four 9th-level characters. This adventure, from author Greg A. Vaughan, continues the Extinction Curse Adventure Path, a six-part campaign in which the heroes lead a traveling circus as they unravel a plot to eradicate all life from the islands of the Inner Sea. This adventure also includes information about the bountiful area known as the Swardlands and the malevolent demon lord Zevgavizeb, as well as new monsters and rules. 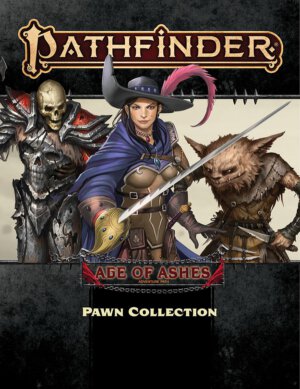 Enemies and allies from the Age of Ashes Adventure Path descend onto your tabletop with the Age of Ashes Pawn Collection, featuring more than 100 pawns for use with Pathfinder Second Edition or any tabletop fantasy RPG! Printed on sturdy cardstock, each pawn presents a beautiful full-color image of a monster or NPC from the Age of Ashes campaign, including fearsome dragons, vile slavers, fiery foes, and many other allies and enemies! 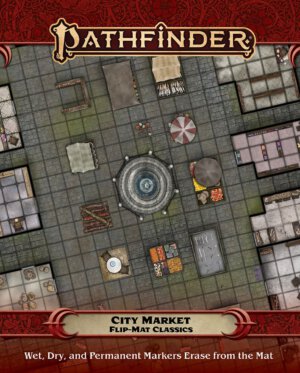 Get ready to shop with Flip-Mat Classics: City Market, a gorgeous double-sided battle-scale map with a market on one side and blank cobblestone side on the other so you can detail your own marketplace or other urban encounter!

The most-popular Pathfinder Flip-Mats in history return! These fan-favorite maps feature versatile adventure settings—city streets, forests, ships, taverns, and more—and now they’re back for a repeat performance. Durable and lavishly detailed, these essential adventure set pieces are sure to bring excitement to your game table for years to come!

This release includes a double-sided Flip-Mat, measuring 24″×30″ unfolded and 8″×10″ folded. A special coating on each Flip-Mat allows you to use wet-erase, dry-erase, and permanent markers with ease! Removing permanent ink is easy—simply trace over any permanent mark with a dry-erase marker, wait 10 seconds, and then wipe off both marks with a dry cloth or paper towel. 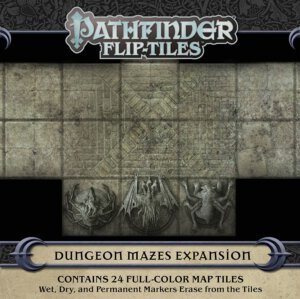 A dungeon may be mazelike, but there is no greater challenge than a maze in a dungeon! Pathfinder Flip-Tiles: Dungeon Mazes Expansion is the newest expansion to the Pathfinder Flip-Tiles: Dungeons Starter Set. With 24 full-color 6″×6″-inch double-sided tiles, each stunningly crafted by cartographer Jason A. Engle, you explore twist and turns, dead ends, and strange spirals. These are all perfect for the next time the heroes delve deeper into a minotaur’s lair or a dark warren!

A special coating on each Flip-Tile allows you to use wet-erase, dry-erase, and permanent markers with ease! Removing permanent ink is easy—simply trace over any permanent mark with a dry-erase marker, wait 10 seconds, and then wipe off both marks with a dry cloth or paper towel. 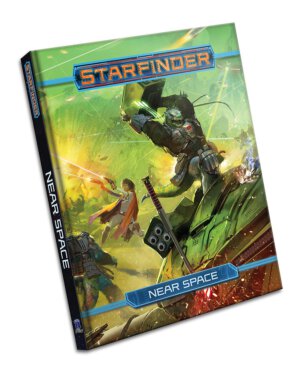 Journey to Near Space, the galactic region that contains the Pact Worlds, the Veskarium, and many of the planets discovered and colonized by explorers from those civilizations. This hardcover rulebook expands the Starfinder campaign setting with details on dozens of worlds and cultures found in Near Space, each perfect as a locale for science-fantasy adventure!

Inside this book, you’ll find in-depth gazetteers of the nine worlds of the Veskarium, the interstellar empire founded by the warlike vesk; detailed entries on other planets and civilizations of Near Space; new starships from the Veskarium and beyond; alternate racial traits for playable Near Space races; and new themes, archetypes, equipment, spells, and more for any character! 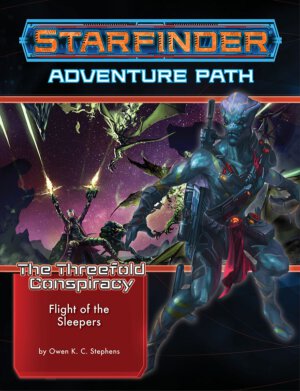 Starfinder Adventure Path: Flight of the Sleepers (The Threefold Conspiracy 2/6)

Barely escaping a doomed transport, the heroes find themselves trapped within a bizarre research facility that has come under attack. Like the other specimens within this crumbling lab, the heroes must seek escape as their first order of business. As they struggle against weird technology and runaway experiments, the heroes run across the elite Stewards agents performing the raid, who prove to be allies and potential rescuers. The Stewards have a mission, however, and they recruit the heroes to help finish it. In so doing, the heroes uncover a little truth and a lot more questions in need of answers!

“Flight of the Sleepers” is a Starfinder Roleplaying Game adventure for four 3rd-level characters. This adventure continues the Threefold Conspiracy Adventure Path, a six-part campaign in which the heroes unravel the machinations of insidious aliens who have infiltrated galactic society. This book also includes an article describing the enigmatic grays, a survey of fringe science, and a selection of new and strange monsters. 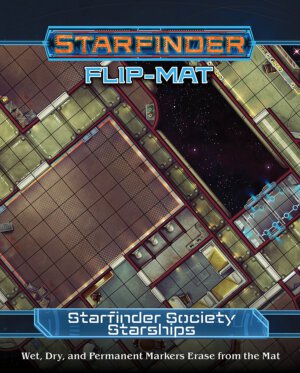 This release includes a double-sided Flip-Mat, measuring 24″×30″ unfolded and 8″×10″ folded. A special coating on each Flip-Mat allows you to use wet-erase, dry-erase, and permanent markers with ease! Removing permanent ink is easy—simply trace over any permanent mark with a dry-erase marker, wait 10 seconds, and then wipe off both marks with a dry cloth or paper towel.