The fast playing Dungeons & Dragons brawling card game, from Wizards of the Coast, is going to receive a third release and this time you’ll play as the baddies. D&D Dungeon Mayhem: Monster Madness will include six monsters as well as the special decks for each. The game is also expanding to include two more players. Monster Madness is for two to six players, ages 8+, plays in around 10-15 minutes, and will carry an MSRP of $34.99 when it arrives on February 14th, 2020.

It’s time for Monsters & Mayhem! Wizards of the Coast is once again getting ready to throw down, this time with the third iteration of Dungeon Mayhem, the easy-to-learn, family-friendly, D&D card game that pits the wits and brawn of a party of adventurers against each other. Dungeon Mayhem: Monster Madness builds on the success of the original game and its expansion, Battle for Baldur’s Gate, with each player embodying one of six epic Dungeons & Dragons monsters. 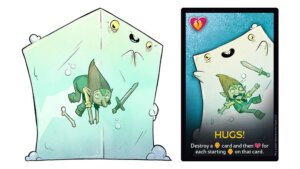 Dungeon Mayhem: Monster Madness will be available in stores everywhere on February 14, 2020, just in time for a romantic battle royal!

In Dungeon Mayhem: Monster Madness, each D&D monster has their own way to charm, crush, disintegrate, or devour their foes. These new decks are fully compatible with all previously published Dungeon Mayhem decks and all of the cards, plus tokens, can be stored in the beautifully designed, monster-sized box. Fans can also enjoy bringing more adventurers into the fold with the addition of rules to include up to 6 players.