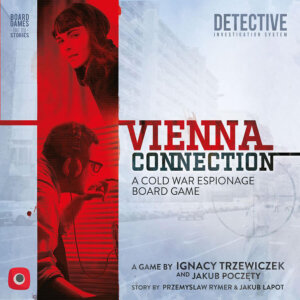 Portal Games is now taking preorders for an upcoming espionage game in their Detective system. Vienna Connection is a story based game where players take on the roles of spies during the 1970s. The game is for one to five players, ages 16+, plays in 90 to 120 minutes, and can be preordered for $45.00 (with an MSRP of $50.00) and is expected to ship in May.

Vienna Connection is a perfect choice for you if you like story-driven games with immersive narration and engaging plot. It’s a fascinating story inspired by true events from 1970s Europe. The plot, designed by Przemysław Rymer, could easily be used as a script for a top-rated TV mini-series on Netflix or HBO. The four missions presented in the box form a single epic story—so if you like TV shows like True Detective, The Outsider, or Mosaic, this might be right up to your alley!

Vienna Connection is a game night experience. It’s not a single session eurogame that you play any day with any group. Instead, this is an entire game night adventure, with clues, leads, and red herrings. It’s the kind of game that you debate and discuss hours after finishing. It involves deciphering messages and analysing various reports and documents for evidence. If you love brainstorming with your friends, debating and discussing different theories and solutions—this is the game for you!

Vienna Connection is the first true spy game. If you like this genre of movies and novels, you can finally play a game about being a spy. There’s no game like it. You run secret operations, intercept Soviet reports, decode messages from the CIA—you do all things you’ve seen in movies. It is a true spy game!

Vienna Connection is a story-driven game. It doesn’t offer many challenges to eurogamers, nor a chance to master a specific strategy to improve the way you can win. It is a story experience—like being part of an interactive TV show. If you’re looking for deep strategic challenges in gaming, you might not find them here.

Vienna Connection is a campaign game consisting of 4 missions. It shines when played as a complete experience. Separate game sessions are less interesting if you don’t know, or don’t experience the whole story. If you feel like you can’t dedicate 4 game nights to play the entire game, you might consider passing on this preorder.

The game is heavily language-dependent. You will read a ton of cards, reports, and files. It’s a full-blown narrative experience. The box comes with 100 pages of different files and documents! Please, consider waiting for a local edition of the game if you and your group are not fluent English speakers.