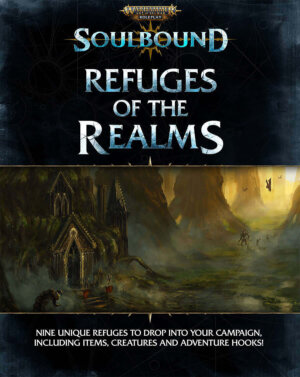 A new supplement for Warhammer Age of Sigmar Soulbound has arrived from Cubicle 7 Entertainment. Refuges of the Realm provides a series of locations across the land offering succor to the player characters. The 16 page PDF is available at DriveThruRPG for $3.99.

The last safe places in the Mortal Realms are falling. While Sigmar gathers his strength in high-walled cities, raging wars and senseless magical catastrophes consume the sanctuaries beyond. The refuges that still stand have used strange and extreme methods to survive, and while there may be safety within, these places often bear little resemblance to the free cities.

Refuges of the Realms presents nine refuges to use in your campaign, as well as items, stat-blocks, and adventure hooks to support these new locations. The refuges include not only the forces of Order, but also Death and Destruction subfactions who don’t mind crossing allegiances for their own benefit. In even the most inhospitable lands, the party can find allies — but they must fight hard if they want these sanctuaries to last.