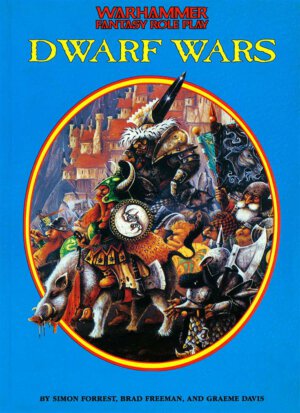 The classic first edition Warhammer Fantasy Roleplay Doomstones Campaign continues for Cubicle 7 Entertainment. Dwarf Wars focuses on the players’ search for the Crystals of Power as their journey is beginning to near its end. The 106 page PDF is available from DriveThruRPG for $9.99.

This product is a scan of Doomstones Part 4 – Dwarf Wars from first edition WFRP.

Dwarf Wars is the fourth part of the Doomstones Campaign.

“Ours is the true cause! Though this usurper sends his army against us, we shall not fail! When Hargrim’s Crown is ours, the Holds will flock to the side of Right and Justice. They will flock to us!”

Civil war is brewing among the Dwarf kingdoms of the southern World’s Edge. In the midst of this crisis, a lost Hold has been found: Kadar-Gravning, the Hold of legendary Hargrim, a Dwarf-King without equal. To the Dwarfs of the World’s Edge, there is no greater symbol of rulership than Hargrim’s Crown. He who owns the crown is the true King, and when civil war comes, the faction that has the crown will surely prevail…

But finding the crown won’t be easy. Kadar-Gravning was sacked a century ago by Orcs. Large parts of the Hold are in ruins, and the Royal Tombs are ringed by deadly traps. Whoever reaches the Hold first can be sure that the enemy is not far behind.

While the Dwarfs fight each other, a small group of adventurers are making for Kadar-Gravning for reasons of their own: they seek the lost Crystal of Water, the fourth of the Doomstones. But will the Dwarfs believe in such a tall story? Adventurers, too,might want Hargrim’s Crown for themselves…

Designed for adventurers in their third or fourth careers, this adventure sees the characters bring their search for the ancient Crystals of Power to a stunning conclusion. The last of these marvels of Dwarf cunning, the Crystal of Water is almost in their grasp.