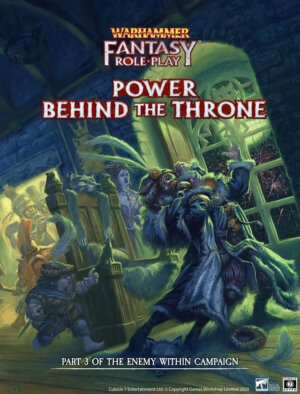 The third chapter of the revised The Enemy Within roleplaying campaign has arrived, from Cubicle 7 Entertainment, for Warhammer Fantasy Roleplay. The director’s cut of Power Behind the Throne raises the stakes for the player characters as they travel to the northern city-state of Middenheim. The 156 page adventure is available in PDF from DriveThruRPG while you can preorder the hardcover book (including the PDF) from Cubicle 7 for $39.99.

Welcome to part three of the revised and updated Director’s Cut of the Enemy Within, one of the most highly regarded roleplaying campaigns ever written!

Power Behind the Throne, arguably the best WFRP adventure ever written, carries on from where Death of the Reik left off, taking your brave heroes from Altdorf to the city of Middenheim, a towering city-state in the north of the Empire where trouble brews and a play for power is made.

Power Behind the Throne Includes:

A wide selection of ‘Grognard Boxes’ that add entirely new ways to play through the adventures, ensuring even those who have played the Enemy Within campaign before will find Power Behind the Throne fresh and new.

The Enemy Within is the campaign all roleplayers should play at least once in their lives, making Power Behind the Throne an essential purchase for all gamers.