The latest supplement for Bolt Action is coming soon and Warlord Games is now taking pre-orders. Campaign Market Garden will tackle the ill-fated operations of September 17-25, 1944 in miniature. There’s plenty to look forward to in the new release and you can reserve a copy for $30.00 and receive an exclusive miniature.

For Bolt Action players Market Garden has it all – daring attacks, determined resistance and heroic last stands by American, British, German and Polish troops ranging from elite veteran paratroopers to novices and from obsolete armoured cars to King Tiger tanks.

This volume covers a very short space of time compared to other Bolt Action campaign books – just a matter of nine days in September 1944 – and is focused on a much smaller geographical area; a single narrow route through the Netherlands rather than a broad sweep of very variable terrain across several countries.

The fighting was incredibly intense; you’ll find bullets, blood, bombs, and bravery in abundance. The Allies struggled to keep the road open and the Germans struggled to cut it, so both sides engaged in attacks and counter-attacks over the same ground and therefore faced the same challenges.

Inside Campaign: Market Garden you’ll flow through 116 pages full of glorious content, history, stunning art and photography, new rules and units! Here’s just some of what you can expect:

Don’t forget, each of our Bolt Action books comes with a special heroic figure and with Market Garden, you receive the Never Surrender model when ordering direct from the Warlord Webstore.

Jeff McAleer
Founder/Editor-in-chief of The Gaming Gang website and host of The Gaming Gang Dispatch and other TGG media, Jeff tackles any and all sorts of games but has a special fondness for strategy, conflict sims, and roleplaying games. Plus, he's certainly never at a loss for an opinion...
Latest posts by Jeff McAleer (see all)
Tags: Bolt Action, Campaign Market Garden, Warlord Games 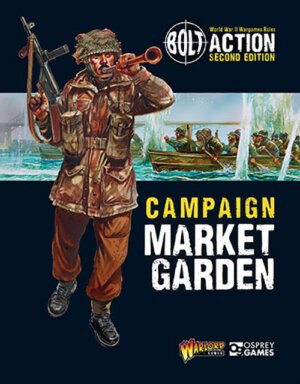 Campaign Market Garden will tackle the ill-fated operations of September 17-25, 1944 in miniature.
0
Awful