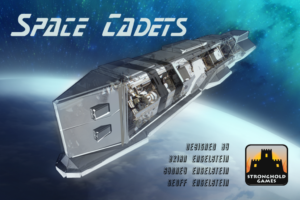 Thanks to the wonders of modern technology Space Cadets – LIVE! will be streaming tonight/Thursday, July 5, over the internet starting at 8pm Eastern Daylight time!

A live and interactive convention event based on Space Cadets has been created. Space Cadets – Live! is a fun and frantic massive cooperative game for approximately 30 players, divided into teams for the different functions of the Starship.

Each team will have a mini-game that they need to complete within a short time limit, and the better they perform the better that ship function will execute. Different teams must also communicate and work with each other while doing their mini-game. Is the Helm team charging towards enemies? The Shield team may want to make the forward shields stronger.

Multimedia, props, and special effects will immerse you in the world of Space Cadets – Live!

And… $1000 in prizes will be awarded for the team who performs the best during Space Cadets – Live!

This premiere Space Cadets – Live! event will be simulcast LIVE to the rest of the convention and to the entire internet via direct feed provided by Bacon Ice Cream Productions.

Space Cadets is a fun and frantic cooperative game for 3-6 players who take on the roles of Bridge Officers of a Starship. Each officer must accomplish his task in order for the team to successfully complete the mission.

If your crew can work together to accomplish the mission goals you just might make it home in one piece.

Space Cadets is currently scheduled for an Essen 2012 (October) release.