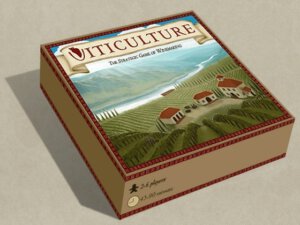 You might not think of wine making when it comes to topics to tackle in a strategy game but Jamey Stegmaier and Alan Stone, founders of Stonemaier Games, have taken their board game project to Kickstarter to launch Viticulture. Designed for two to six players, Viticulture pits competing wine makers against each other in order to become the most prestigious vineyard in pre-modern Tuscany. I’ll be the first to point out you may want to take a pass on watching the first video located on the Kickstarter page as it’s a bizarre Sideways-esque short which is more likely to dissuade you from backing the project as opposed to supporting the game due to it’s extremely poor production; I can’t tell you if the worst part of the video is the acting, the camera work, the sound, or the script as they’re all equally bad. Thankfully, Stonemaier is looking to make games and not movies…

Viticulture: The Strategic Game of Winemaking is a 2-6 player game that takes 45-90 minutes to play. In the game, you find yourself in rustic, pre-modern Tuscany, where you’ve inherited a meager vineyard. You’ll have a few plots of land, an old crushpad, a tiny cellar, 3 workers…and the dream of owning the best winery in Italy.

Your job is to allocate your workers and helpful visitors to complete various tasks throughout the year. Each season is different on a vineyard, so the workers have different tasks they can take care of in the summer and winter. There’s competition over those tasks, and often the first worker to arrive at each one has an advantage over the rest.

Using those workers and visitors, you can expand your vineyard by building structures, planting vines, and filling wine orders as you work towards the goal of owning the most successful winery in Tuscany.

If you or someone you know is an avid wine drinker or loves board games such as Settlers of Catan, Agricola, Stone Age, or Fresco, Viticulture is the perfect fit.

We think you’ll love playing Viticulture for these four reasons:

1. The romanticism of wine. There’s something universally romantic about the idea of running a vineyard. It’s appealing that you can choose exactly which strains of vines you get to plant in the ground and what you do with the grapes when those vines bear fruit. Every bottle is the product of your creativity. We’ve captured the essence of that creativity in each box of Viticulture.

2. Competition without cut-throatedness. In many board games–especially Euro-style games, the category Viticulture falls into–your opponents can ruin your strategy or even your day. We want people to walk away from Viticulture feeling great, so we made sure that there is healthy competition and conflict in the game without any of the cut-throatedness that can ruin someone’s gaming experience. Much of that competition happens on the common board, while each player has complete control over the strategy they implement on his/her vineyard mat.

3. Choices, not luck. With all due respect to Monopoly, we believe that making choices are a lot more fun and interesting than relying almost purely on luck. There are no dice in Viticulture. There is a small amount of luck when you draw cards, but you can control that luck by drawing more cards. The vast majority of the game is about choice–when and where you choose to use your workers.

4. Scaleability and replayability. It’s really important to us that Viticulture is just as enjoyable–and the same game–whether you’re playing one on one at lunch or with your spouse and two other couples over a few bottles of wine. So we created a new scaling mechanic to handle various numbers of people (2-6). Also, we wanted to make sure that the game is different every time you play–in fact, not only is every game different, but every year within the game is different due to the turn-order mechanic we employed.