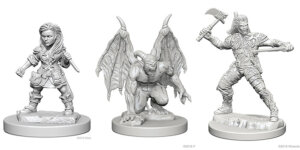 You may have seen some of the new line of WizKids Deep Cuts miniatures if you watched my Origins 2017 interview with Scott D’Agostino but the video surely doesn’t seem to do these figures justice. Available for both Dungeons & Dragons and Pathfinder (or any fantasy game which tickles your fancy really) these primed but unpainted minis are not only designed to be very forgiving to fledgling painters but also pack a lot of punch for their price point. The plastic figure lines come in two flavors, Dungeons & Dragons Nolzur’s Marvelous Miniatures and Pathfinder Battles, with an MSRP of $3.99 for each blister pack. Most packs contain two or more figures, with larger creatures coming one to a pack, all with unique sculpts.

Your eyes aren’t deceiving you as far as that MSRP! The price really is $3.99 per pack! I feel like I’ve traveled back in time to the early 1980’s with mini prices like that! Of course back then the miniatures didn’t have the sort of detail possible now and they were made from lead – thankfully I didn’t chew on them…

Hopefully I’ll get a chance for a much, much closer look at these miniatures in the very near future! 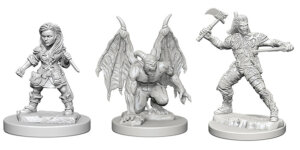 The collections will include iconic characters, creatures, and even scene-building elements, all available in three types of specialty packs that will each contain a variety of sculpts:

The highly detailed miniatures feature an enhanced sculpting process, which highlights minute elements, and includes deep cut surface detail and scaled features for easier hand painting. They also come in dynamic and exciting poses, are pre-primed with Acrylicos Vallejo paint, and are ready to go directly out of the box. Customize the look and feel of your characters and campaign like never before. The new line is set to launch in late 2016 and will be available at friendly local game stores world-wide.
Tags
Deep Cuts Dungeons & Dragons Pathfinder WizKids