WWI Card Driven Wargame Iron Storm is Up for Preorder

The World War One card driven wargame Iron Storm is up on the P500 preorder list for GMT Games. Promising the ability to simulate the entire conflict in three to five hours, the game will include four scenarios including the entire Great War. Iron Storm is for one or two players, ages 14, plays in three to five hours, and can be preordered right now for $55.00 with an eventual MSRP of $79.00.

Iron Storm is a two-player strategic wargame that allows you to recreate the entire First World War in a single afternoon (3-5 hours). The game uses an innovative card engine system where each player uses their entire hand in one go to activate armies, resolve operations, and support battles with combat cards. It also simulates human and economic attrition during the course of the war by gradually adding cards to each deck that will have limited use in the hand and take additional effort to remove. Iron Storm has been designed to be as simple as possible in terms of rules and has no exceptions to remember that are not indicated on the cards or board. It is equally suitable as an introductory wargame or as a tight duel for experienced players.

Jeff McAleer
Founder/Editor-in-chief of The Gaming Gang website and host of The Gaming Gang Dispatch and other TGG media, Jeff tackles any and all sorts of games but has a special fondness for strategy, conflict sims, and roleplaying games. Plus, he's certainly never at a loss for an opinion...
Latest posts by Jeff McAleer (see all)
Tags: GMT Games, GMT Games P500, Iron Storm 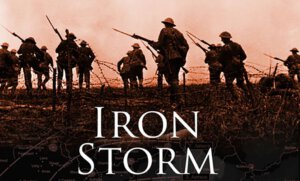 WWI Card Driven Wargame Iron Storm is Up for Preorder

The World War One card driven wargame Iron Storm is up on the P500 preorder list for GMT Games.
0
Awful