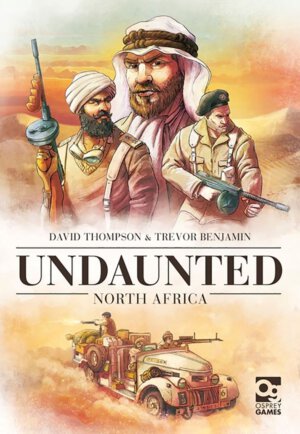 Following up on the well received Undaunted: Normandy, Osprey Games will release a second title in the series next Spring. Undaunted: North Africa takes the WWII action to …you guessed it …North Africa. British and Italian forces will go head to head in the desert and this release will even include armored units. Undaunted North Africa will be for two players, ages 14+, and play in around 45-60 minutes. No word yet on an MSRP but I’ll guess it will be in line with the previous release in the line, about $40.00, when it arrives in May 2020.

The Undaunted series continues with this two-player deck-building game of tactical combat, pitting the raiders of Britain’s Long Range Desert Group against Italian forces in the North African Theater of World War II.

The North African campaign has begun. Take control of the British Army’s Long Range Desert Group and operate behind enemy lines or command the formidable Italian forces opposing them. In Undaunted: North Africa, a sequel to Undaunted: Normandy, players once again lead their sides through a varied series of missions. As casualties mount, wounded soldiers leave the players’ decks, forcing them to adapt in the face of changing tactical circumstances. Use your cards to strengthen your forces, deploy vehicles to advance rapidly across the battlefield, and seize the initiative as you determine the outcome of the North African Theater.