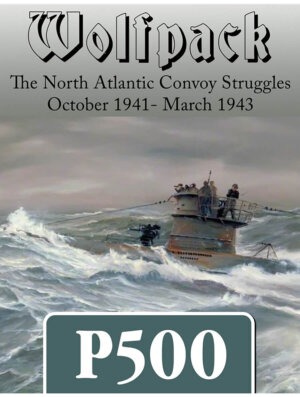 GMT Games has a new WWII P500 entry for preorder. In Wolfpack, designed by Mike Bertucelli, up to four players will take on the roles of German submarine commanders hunting allied shipping during the first three years of the war. The game is for one to four players, ages 14+, with variable gameplay times. Over 300 orders have already been placed and you can reserve a copy of Wolfpack for $52.00 with an expected MSRP of $72.00.

Wolfpack is a tactical, historical game depicting the struggles between the German submarine Wolfpacks and the allied merchant convoys of WWII. Wolfpack is set in the vast North Atlantic from late 1941 to early 1943.

Wolfpack is a 1-4 player solitaire/team game. When playing solo, the player will command 2 – 4 submarines. In a team game, players will command 1 – 2 submarines depending on the number of players. The convoy merchant ships and escorts will be controlled by an AI system. In Wolfpack, players will assume the role of a German WWII submarine commander. Players will need to work together to achieve victory.

In a game of Wolfpack, players will start by approaching the Allied merchant ship convoy while trying to make it through the escort’s screen undetected. If successful, your submarine will make an attack run on the convoy. As the commander, you will make many decisions like maneuvering your submarine to the best firing angle while making TDC (torpedo data computer) calculations for each of your torpedos, trying to achieve your best shot. You will issue orders to your crew to deal with any damage that your submarine may have sustained. Should we run silent? Do we press the attack? The decisions are up to you. Do all of this while trying to sink as much allied merchant ship tonnage as possible and avoid being detected and sent to the bottom by the allied escort ships.

Wolfpack uses a unique card system to resolve many of the game effects.

The heart of Wolfpack is its campaign system. Players will track the progress of their crews during the campaign, linking multiple patrols together to gain as much experience as possible. The more tons of allied merchant ships that you sink, the more experience points that you will have to spend on improvements to your crew’s performance. 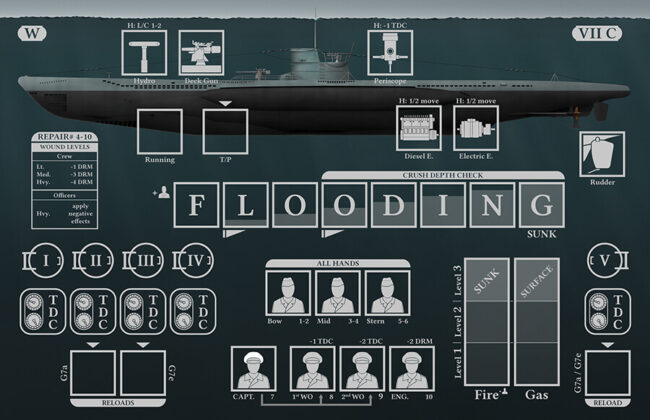