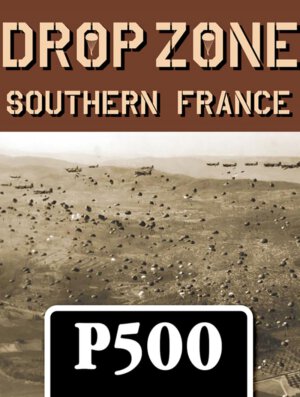 A new World War Two game is up on the P500 for GMT Games. In Drop Zone: Southern France, players will experience the fog of war, through blocks, as the game tackles the first two days of Operation Rugby during the D-Day invasion. The Drop Zone: Southern France is for two players and you can preorder at the P500 price of $38.00 as the game will carry a release MSRP of $55.00.

Drop Zone: Southern France  is a fast-playing (about 2 hours), company-level block game of the Allied airborne assault (code-named Operation RUGBY) that spearheaded Operation DRAGOON, the Invasion of Southern France—the Second D-Day, August 15th, 1944. Early on the morning of D-Day, the allied First Airborne Task Force (1st ABTF) parachuted a dozen miles behind the Riviera landing beaches to seize key towns and road junctions, to prevent the German occupation forces from counter-attacking the amphibious landing, and to facilitate the advance of Allied forces. The 4:00 AM parachute drop was badly scattered due to an unexpected dense fog bank that blanketed the battlefield. Drop Zone: Southern France covers the first two days of this airborne operation in six tense turns, when the American and British paratroopers and glider-men fought surrounded and alone, supported only by French resistance bands.

The game board is a hex map of the Argens and Naturby River valleys and surrounding areas in Provence, 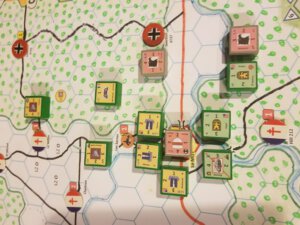 Southern France, covering the area of operations. Each hex measures about 500 meters across. The key towns, villages, roads, rivers, and bridges that were fought over are indicated. The blocks portray companies and company-sized units of allied paratroopers and glidermen, French resistance bands, German Infantry, and a few small armor units on both sides. Assets depict fire support units (artillery, heavy mortars, and anti-tank guns) as well as key capabilities (such as reconnaissance and seizing initiative).

Drop Zone: Southern France shines in its depiction of the fog of war (both literal and figurative)–blocks conceal unit type and strength. On the first day, Allied parachute companies begin scattered across the board with minimal strength. German reinforcements arrive in a random fashion, often surprising and disrupting the plans of the opponent as well as the controlling player. The correlation of forces ebbs and flows as the Allies gradually build up their parachute companies and gliders deliver reinforcements and heavy weapons. Meanwhile, German reinforcements steadily increase in quantity and quality. The chit pull activation system adds another level of uncertainty. By D+1, the second day, both sides have gained in strength and acquire more powerful assets, leading to larger, bloodier battles as time runs out to achieve victory. It often comes down to the final roll of the dice.