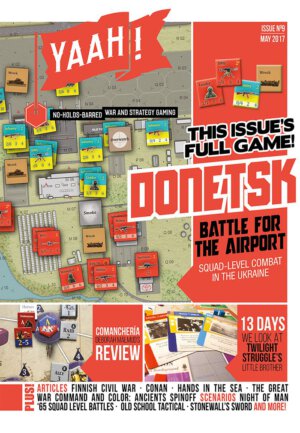 Eighty-four pages of gaming goodness is heading your way as Flying Pig Games newest issue of Yaah! magazine is ready to land in your hands. Included in issue number nine is a wargame torn straight from recent headlines with Donetsk: Battle for the Airport. This is a squad level game which recreates the back and forth struggle between the Russian backed Donetsk People’s Republic (DPR) and Ukrainian military and volunteer forces for control of the airport in late 2014 and early 2015. Of course, there’s more than just the game to look forward to as the issue is chock full of goodies. You can order the physical issue for $40.00 or in PDF from Wagame Vault for $15.00.

And, once again, we’re back. Yaah! Magazine #9 is another thick issue stuffed full of things like words, pictures we stole off the Internet, die-cut counters, and game maps. How thick? 84-pages thick. Thick enough to discipline your dog, so just sit down and listen.

We’ll lead off with the game, because our surveys say that despite the riveting articles, the pulse-pounding pizzazz of their pretty pictures, and the immersive scenarios, people buy these magazines for the game. This issue’s game is Ryan Kirk’s Donetsk., a squad-level tactical game that simulates the battles for the Donetsk Airport in the Ukraine 2014-2015. You, or someone like you, will control squads, RPG and machine gun teams, BTRs, T-64 tanks, snipers and more, as you attempt to gain control of the airport.  The game comes with four scenarios, 88 sharp-looking die-cut counters, and a beautifully illustrated game map.  Ryan writes an excellent lead in article that will educate those who were unaware of the Russian-backed separatist’s little war with the Ukraine.

Articles? We’ve got your articles right here. There’s a great piece of prose on GMT’s Comancheria by Deborah Malmud, another on Twilight Struggle’s little brudder, 13 Days, written by Nick O’Neill, an insightful piece on one of the most creative slices of gaming released in 2016, Cool Mini or Not’s The Others, by Matt “The Man” Foster, as well as words on Paper Wars Finish Civil War, Col Smitty’s thoughts on The Great War, Eddie Carlson’s take on Monolith’s Conan, and Roger Leroux’s opinion on the amazing deck-building game, Hands in the Sea.

Last, but not least in terms of what we are super excited about, we have solitaire scenarios/RPG/story for Night of Man, scenarios for ’65, Old School Tactical, Dead Reckoning, Herm Luttmann’s Stonewall’s Sword, and a King Arthur Variant for Command and Colors: Ancients.

It’s 84 full-color pages in all, and it’s shipping now!