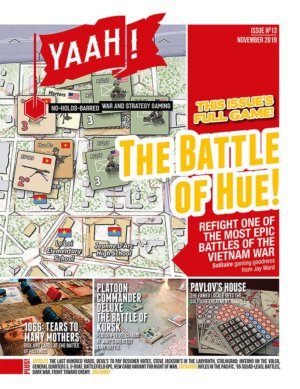 The latest issue of Yaah! magazine is now available from Flying Pig Games. This time out, in issue thirteen, Jay Ward’s The Battle for Hue is the included wargame alongside the usual assortment of articles, reviews, and game scenarios. This issue is shipping right now and carries an MSRP of $40.00 or can be had at Wargame Vault in PDF for $15.00.

Here comes lucky number thirteen. Yaah! #13 that is. This issue comes jammed with the usual number of entertaining articles, a damn fine game, and wait for it… scenarios and variants are back.

First up is the The Battle of Hue! A solitaire game designed by Jay Ward and based on his popular Tiny Battle Publishing title, The Battle for Ramadi. The Battle for Hue! Allows gamers to control the forces of the United States and their allies as they battle to wrest control of Hue from the North Vietnamese Army and their Viet Cong friends.

Our articles include pieces on The Last Hundred Yards by well-know designer Arrigo Velicogna, a look at STALINGRAD: Inferno on the Volga and Dan Verssen’s Pavlov’s House by John Burtt, and Keith Beason examination of Hollandspeil’s Horse & Musket series. But the words don’t stop there, the magazine also includes articles on the Battlefield Ops miniatures game by Norm Lunde, Roger Leroux’s thoughts on Steve Jackson Games’ HUGE The Fantasy Trip reprint, John Burtt’s feelings on Platoon Commander Deluxe: The Battle of Kursk, Herm Luttman’s designer notes for Tiny Battle Publishing’s popular The Devil to Pay and much more.

In the scenario and variants section we have two shiny new scenarios for ’65 Squad-level Battles in the Jungles of Vietnam, a Dark War skirmish scenario, and some new Action Cards for Night of Man. That’s enough to keep anyone busy for a few nights of gaming.