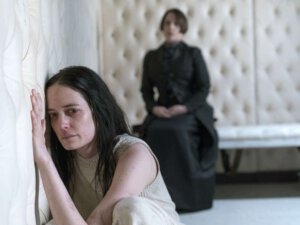 As the two part season three finale of Penny Dreadful airs tonight, executives at Showtime have continued to leave fans in the dark regarding continuing the series into a fourth season. This is a bit strange since the cable network tends to renew shows fairly early in a season’s run. Part of the problem is obviously due to Penny Dreadful’s rating drop compared to its first two seasons but, as Forbes has recently reported, fans might not need to be overly concerned with cancellation since Showtime already knew AMC’s Preacher would cut into the viewership.

The Victorian era horror mash-up might not be everyone’s cup of tea but the series continues to be a favorite of the critics and a staunch fan base. Not to mention we get to witness a near weekly tour de force from Eva Green as Vanessa Ives. I like the show and, even though Penny Dreadful can be a bit uneven at times, would love to see the various story lines tied up in a fourth season. Perhaps a move from the Sunday night 10pm slot could be in order?

I’ll guess we’ll see another season of Penny Dreadful simply because Showtime doesn’t have much in the way of scripted programs to drive subscriptions other than Ray Donovan, Homefront, and perhaps the upcoming Roadies. Although there has been a decline in the horror series ratings, Penny Dreadful is still pulling respectable numbers and – with horror being a hot genre – it doesn’t hurt to have a series of its caliber in the network’s stable.