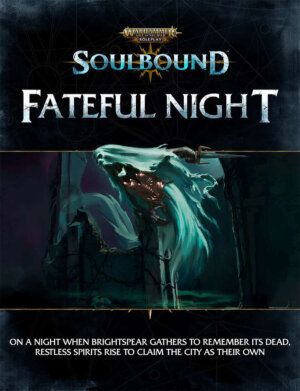 Players must race against time to prevent a cabal of necromancers attempts to sacrifice the city of Bightspear to the realm of the dead in Fateful Night, a gripping follow up to the Soulbound Starter Set.

Fateful Night benefits from a strong sense of pacing, allowing tension to flow and ebb. The opening, set at a combination festival and public memorial service, does a solid job setting expectations and then promptly shattering them to bits. Particularly with a confident GM at the helm, it’s a nice way to emphasize how chaotic and how deadly the events truly are without bogging the message down in long, drawn-out combat. The choices players make aren’t easy ones and there’s a real sense of desperation as they battle through hoards of chainrasps and other undead threats in an attempt to save Brightspear.

Soulbound has consistently excelled in its scenic writing and Fateful Night is no exception. Even for those who aren’t familiar with the setting, there’s no shortage of atmospheric detail to help enmesh players in the besieged city’s sights and sounds. The ghost of the Necroquake looms large over the events of the adventure and help to ground the dread of the goings-on in a real sense of the city’s history. 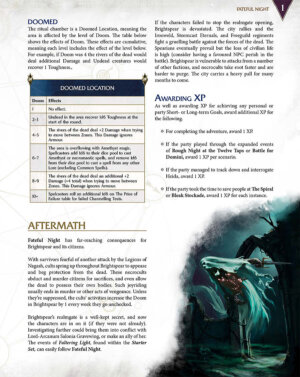 Fateful Night has been designed as a follow up to the Soulbound Starter Set and offers GMs a demonstration of how Doom can affect gameplay and narrative. It’s concrete, yet unobtrusive, and the design choices made in service of this demonstration don’t intercede on the player journey. Despite being designed as a follow up adventure, however, there’s no reason why (with a few tweaks) Fateful Night couldn’t serve as an alternative campaign starter in and of itself. With the potential for major ruin to Brightspear, even this brief adventure is rife with seeds for a larger story.

Fateful Night does have its more unusual moments, however. A brief aside with a tavern of patrons possessed by haunted beer (“The beer! The beer is haunted!”) is objectively funny; the heroes’ saving grace in this scenario mostly comes in the fact that said spirits have not remembered how to use limbs. It’s a great moment with real stakes, but it feels like too much levity for the rest of the adventure. Any good horror scenario –if Fateful Night can even be called a horror scenario– requires some moments of perceived safety, but these moments must be in scale. The aside is otherwise an absolute delight and in any other adventure or in a longer campaign would be a highlight.

Organization and layout are no problem for those relying on digital devices to GM. Important details are called out in a way that’s easy to keep track of and information flows logically. Enemy information is contained in tidy stat blocks at the back and can easily be transferred into a document for quick reference if needed.

Fateful Night offers compelling roleplaying opportunities in a rich and well-developed setting, perfect for existing fans of the franchise or as an alternative entry point for those who find themselves curious. Despite a brief, admittedly enjoyable, sojourn into the borderlands of the potentially absurd, the adventure moves at a brisk pace and emphasizes the consequences of player actions at every major narrative junction.

TGG REVIEW
8 TGG SCORE
0 VISITORS' SCORE (0 votes)
Summary
Fateful Night offers compelling roleplaying opportunities in a rich and well-developed setting, perfect for existing fans of the franchise or as an alternative entry point for those who find themselves curious.
REVIEW SCORE
What people say... Leave your rating
Sort by: