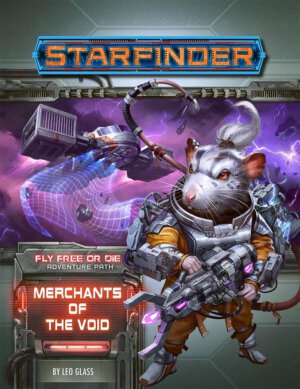 Title: Starfinder Adventure Path #35 – Merchants of the Void (Fly Free or Die 2 of 6)

Merchants of the Void, the second installment in Starfinder’s Fly Free or Die path delivers a fun gameplay experience, even as it tends to leave its most interesting cards on the table.

By this point, player characters have the Oliphaunt firmly in hand and, with help from their friendly dispatcher Tarika, are on the hunt for work. Merchants of the Void delivers precisely what’s on the tin, bringing the party into contact various merchants ad their wares in pursuit of credit — and a dangerous conspiracy.

Merchants absolutely puts a number of interesting pieces in play, chiefly the Adamant Scale and the conflict between the ijtikris and the Veskarium on Vesk-2. The Scale’s grotesque torture of the potential friends and allies player character’s have made is also a moment for some potentially emotional roleplay, something that is not often a driving element of this adventure path thus far. The installment also offers a number of thematically fun challenges, such a race with the Wintermourn, a rival vessel, and driving defrex through various shenanigans. 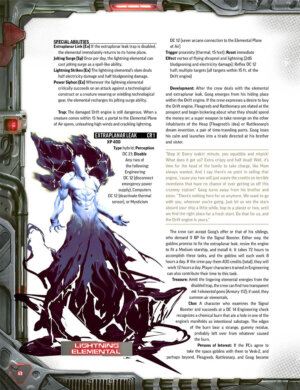 The installment also manages to avoid the trap of simple blue-and-orange morality; when it comes to arguably the most significant decision of the installment, there is no clear-cut delineation between “good” and “bad.” Even in attempting to be noble, player-characters will still cause harm to NPCs with whom they develop a bond, barring some extreme and decidedly unscripted creativity. Even in the background, there’s some compelling moral dilemmas: the ijtikris are so desperate in their battle against the Veskarium, a battle for what they consider to be sacred ground, that they are willing to draft the flesh of the dead — who, in this case, happen to be the murdered manifest of a starliner.

Character writing is particularly strong in this installment and it’s used to potentially devastating effect in Act Four. GMs are given no shortage of material to make players care and would do well to use it to their tale’s advantage.

Merchants of the Void puts elements on the table and executes them well. There’s interesting combat; there’s room for creative problem solving; and there’s some glimpses of a truly emotionally compelling narrative. It’s easy to run; NPCs continue to be interesting; and the supporting documentation adds meaningful information.

It’s just that lots of these elements feel like they could be explored in more compelling ways. The obliteration of the Harlequin’s Prayer by a cult leader is enough to be the start of its own adventure path. Instead, the matter of “solving” the mystery is almost entirely optional, though it does come with a nice experience point reward. Though the path does hinge on the player characters seeking and completing jobs, Merchants of the Void is at its most delightful when it throws curveballs.

Merchants is a solid follow-up to We’re No Heroes, delivering a series of four connected mini adventures with some great opportunity for roleplay. Players who enjoyed the previous installment will find even more to like here and GMs can either play as written or expand on the concepts, spinning them off into side quests or a separate adventure altogether.