Strength of Thousands is an undeniably ambitious adventure path. Combining a coming of age tale with a more traditionally high stakes adventure, it spans great lengths of time and follows the heroes as they progress both personally and professionally. When it lands, it is superlative storytelling in a rich and compelling world that stands in sharp contrast to the settings for many similar narratives. When it falls short, however, it highlights the differences between what you can get away with in a novel as opposed to on the gaming table.

“Doorway to the Red Star” is not a bad adventure. The stakes are high, the combat is compelling, and the third act is properly thrilling. There are opportunities to call back to past adventures and the potential for fun character beats between players and NPCs is high. The themes of good repaying good and mind before muscle again themselves known and help to give the whole narrative a kind of spiritual cohesion.

Strength of Thousands has always centered player agency – and that’s proven to be a double-edged sword. It’s delightful to see an adventure so expressly value curiosity, empathy, and creativity in problem solving, but it can also lead to periods that feel unmoored, particularly when sandwiched between more narratively-compelling goings-on.

The opening act of Doorway to the Red Star suffers from this overabundance. While the adventure does include interspersable events and provides guidance on how to run a semester’s worth of downtime in which players teach classes and prepare for the expedition, it still requires a confident GM and dedicated players to work effectively. In a novel or on a television show, this preparation would be handled in montage; at the table, players must actually play through. The success of this tactic hinges on player buy-in, which in turn, largely rides on the skill of the GM to make the narrative enticing enough in the meantime to buy into.

While this does lead into the expedition proper, the expedition also quickly finds itself in this trap as players must negotiate with the Iobane mages and their leader, Mpondo. Again, this idea of negotiation isn’t a bad one in and of itself; however, the process can take weeks of in-game time. Though the concept worked well in “Secrets of the Temple-City,” it was because the narrative hinged the fate of innocents on the heroes’ ability to safely and deftly navigate a complex social system in order to have any hope for those most desperately counting on them. “Secrets” highlighted that though the heroes had grown and progressed, there would always be problems even their prodigious magical talents could not solve — a common theme in coming of age tales.

Here, it doesn’t land the same way. One would hope that the characters have already learned this lesson and to repeat it feels redundant. Yes, there are stakes, but they lack the human element that worked so well in Temple City. Though players do eventually lean the reason for the Iobane’s skepticism and distrust, it raises key questions that pull at the fabric of the worldbuilding in a way that risks immersion in the world.

Acts two and three do solve this problem by providing clearer, more concrete goals and more action-oriented means of achieving them, but it’s hard to shake the sense that the first act could be largely omitted without much harm to the overall story. While the material with the Iobane is important, its placement here doesn’t serve the pacing of the narrative at large.

Strength of Thousands is designed to be a sprawling tale and its ambitious bent deserves recognition, even if certain elements aren’t as successful as others. Doorway to the Red Star, despite its challenges, offers meaningful advancement of the Vesicant Egg plot and sets players up for the final adventure in a big way. A strong GM and creative players are more than capable of counterbalancing for weaknesses in the printed text, but it does call into question the appropriateness of the adventure path for players less interested in the roleplaying elements of a tabletop game. While Doorway to the Red Star feels uneven, by its conclusion, it has established the foundation for a satisfying final act.

Sami Yuhas
Writer, gamer, and necromancer bard (at least in D&D). Sami focuses primarily on board and tabletop gaming, with a focus on sci-fi and fantasy, as well as worker-placements and co-op titles. She prides herself on the ability to overthink world building in games, and cites a three post manifesto on the costuming of XCOM 2 as among her greatest nerd achievements.
Latest posts by Sami Yuhas (see all)
Tags: Michael Sayre, Paizo Inc, Pathfinder, Pathfinder Doorway to the Red Star 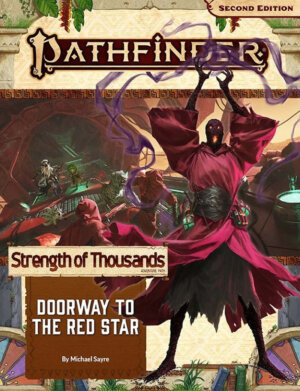 A largely unstructured first act and the return of a potentially divisive mechanic put a crimp in an otherwise very good adventure.
7.5
Good