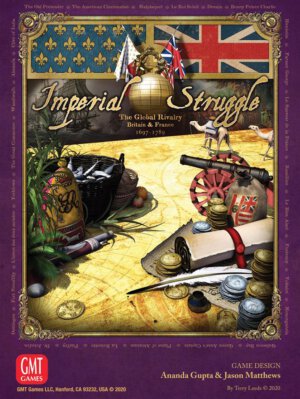 Genre: Strategy game of the British and French rivalry during the 17th-18th centuries.

I share my thoughts about the new two player strategy game Imperial Stuggle from GMT Games. Is this a true successor to Twilight Struggle and 1960: The Making of a President? Or an over-complicated misstep by the dynamic design duo of those classics? You’ll find out.

4:13 Discussing Imperial Struggle
36:53 Final thoughts and the review score
TGG REVIEW
8.5 TGG SCORE
8.9 VISITORS' SCORE (1 vote)
Summary
Imeprial Struggle strikes me as the logical successor to Twilight Struggle and 1960. I've really enjoyed the game so far, although I need further plays to begin to effectively put together a strategy fro either superpower. The game is far more complex than the previously mentioned TS and 1960 but that will certainly appeal to the grognards out there. The complexity may turn off some fans of the previous designs who might not be ready to invest the amount of time and effort it'll take to effectively learn Imperial Struggle.
REVIEW SCORE
What people say... Leave your rating
Sort by: