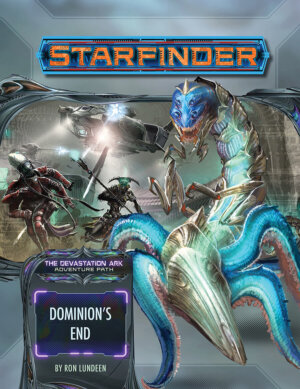 Dominion’s End is a perfectly well-rendered scenario. It manages to offer a variety of high-stakes combat encounters against interesting foes while filling in new detail about the sivvs and just what’s happened on Ark Prime over the years. The writing is clear and descriptive while the combat adventures keep things moving along at a nice pace.

The Starstone Blockade, this chapter’s immediate prequel, is one that deals heavily in narrative stakes. If players fail to act —and to do so in a timely fashion— there are tangible consequences. Situations escalate. Problems grow exponentially challenging. People die. Player characters are enmeshed in a dire and deteriorating situation and it truly feels it.

The same can’t be said for Dominion’s End. While the adventure starts with players trapped in a VR brainwashing simulation with the opportunity to escape, there’s no substantive penalty for failure to do so. Though characters may notice something amiss over the six encounters of the simulation, there is no real connection between being trapped within it and becoming indoctrinated by it. Starfinder is, admittedly, not a horror game and it’s understandable that author Ron Lundeen was hesitant to punish players for potentially bad dice rolls in a scenario they had no warning of nor means to avoid. The downside, however, is that rather than feeling like a desperate fight for player character’s sanity and sense of self, the six scenarios just feel drawn out. While they’re meant to illustrate the brutality of the sivv, they miss capitalizing on the horror of obliterating the 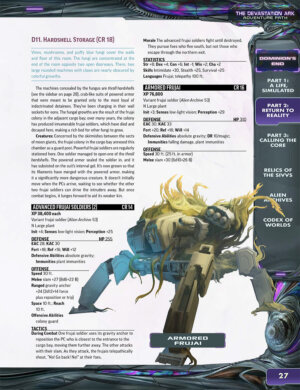 individual’s sense of self — leaving the sivv to feel like just another conquering force, albeit a particularly nasty one.

The liquidation vats further into the ship face a similar difficulty in establishing meaningful risk or consequence. While the vats were once used to dispose of those who resisted indoctrination or were otherwise unruly, they are now significantly less dangerous. This, in and of itself, does make sense; there’s bound to be a loss in potency over thousands of years. However, the text notes that one vat does still pose a fairly significant threat at 20d6 of damage per turn if immersed. This vat, it’s explicitly noted though, is difficult for players to accidentally find themselves in — or even particularly near. While combat in the room could ostensibly pierce the container, this isn’t made to feel like a real threat. Again, from a gameplay perspective, this isn’t a bad decision: the emphasis should be on the active combat threat in the room. From a narrative one, however, it falls a bit flat.

Not every adventure needs to be driven by such stakes, however, and for players and GMs more interested in lore and interesting combat, Dominion’s End closes the story out nicely. Player characters have gained a wealth of experience, some rewards, and saved the day — and sometimes, that’s all you want in an adventure.

Dominion’s End closes out with a moral dilemma: what’s to be done with the sivv in stasis? While the text lays out three options —to destroy the ship, send the sivv back adift in stasis, or awaken them with the hope of integration into Pact World society— it does also encourage players to come up with their own scenarios. This is, perhaps, the most interesting part of the adventure and certainly the one with the most room for interesting roleplay. Should the player-characters choose to awaken the ship’s inhabitants, they quickly find themselves in charge of their integration into modern life. This is a fascinating story hook that offers no shortage of potential adventures.

Art and layout continue to be a strength with high marks for aesthetic appeal and screen readability. Layout continues to be GM-friendly and maps provide helpful orientation for players.

Taken as a whole The Devastation Ark is a strong Adventure Path. While the second chapter is far and away the standout, it’s bookended by an enjoyable introduction and conclusion and sets the stage for an ambitious GM to create any number of tales as the PCs attempt to manage the Pact Worlds’ newest inhabitants. The series adds interesting worlds, NPCs, and lore into the broader Starfinder universe and is a solid addition to any interested GM’s library.

Call of Cthulhu: Masks of Nyarlathotep Slipcase | Review and Page-Through

Crystal Palace | Review and How to Play