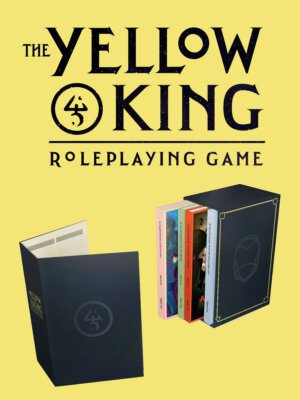 Price: $99.95 Slipcover Edition from Pelgrane Press, including PDFs / $54.95 in PDF at DriveThruRPG

Chaosium Inc may be the name to beat in Lovecraft, but The Yellow King is a stark reminder that Pelgrane Press is a force to be reckoned with when it comes to reality-altering horror.

The Yellow King runs on Pelgrane’s GUMSHOE system and offers GMs and players alike the chance to play in one of four settings or, more interestingly, across all of them. 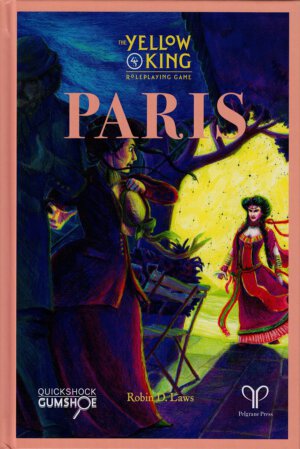 GUMSHOE, it should be noted, is a great fit here. The emphasis on investigation really allows players to feel as if they’re piecing together the insidious truth. It’s a nice choice in ludonarrative consistency and offers a real opportunity for the build-and-release of tension that’s so essential to really selling this kind of horror game.

Beginning in Belle Epoque Paris, plays take on the role of bohemian American ex-pats, artists, writers, and muses who have begun to notice strange and dark occurrences following the rumored publication of the reality-warping play. From there, players can advance to war torn Europe in an alternate 1947, where the King has set his playthings to battle; to an alternate present day in the wake of a revolution that has overthrown the monstrous Castaigne regime in the United States; and finally, to our own present day — where all is not as it seems.

The driving concept that underlies The Yellow King is a fascinating one. The four settings, and by extension, characters, that may or may not be intertwined across alternate realities is heady and the smooth execution speaks well of its development. The storytelling challenge for both GMs and players choosing to undertake such an intertwined campaign is multifaceted, but opens the door for some truly high concept narrative and character explorations. This isn’t a game for beginning role players, but for those who want something to really sink their teeth into, this is a winner.

Robin D. Laws revels in Robert Chambers’ source material and a good working knowledge is helpful in fully appreciating the setting and in crafting narrative arcs, though it’s by no means strictly necessary. Those completely unfamiliar, however, may find themselves a little lost. Laws’ supplementary information and explanations are more than enough to give players a strong grounding in the story world, including the sociopolitical and historical realities of the time. Aftermath even includes a handy (and detailed) Q&A for players unfamiliar with one of Chambers’ more gruesome literary inventions: the Government Lethal Chamber. 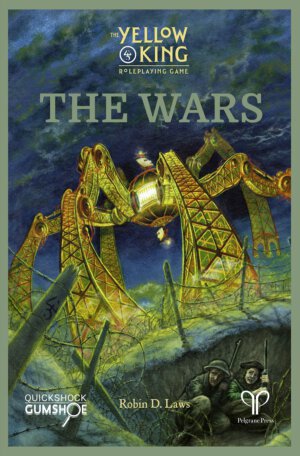 Aftermath is also notable for some of the more uncomfortable parallels some readers may draw between the fictional Winthrop regime and present day political reality. While some may enjoy the idea of a country gone mad taken literally, others may not be so warm to the idea.

Laws’ prose across the four volumes does deserve mention. Though it’s enjoyable and accessible, it tends to be rather dense and information heavy. GMs will want to rely on the books as a guide when scenario building, particularly for Book Two: The Wars and Book Three: Aftermath, which are set in realities distinctly altered from our own. Layout is easy to navigate and rules changes are addressed up front from setting to setting, but there’s no shortage of information to parse. Even with a solid understanding of the GUMSHOE system, gamers may struggle with playing the world straight out of the box.

The Yellow King tends to be light on visuals, favoring a stable two column layout in an easy-to-read font. Reading on screen isn’t necessarily a challenge, but when needing to cross-reference among the four volumes, it can get hectic — especially for those reading on a tablet. What art the readers are presented with is full page and full color; in a neat detail, its style evolves with the time periods that inform each volume while still maintaining a cohesive art direction.

In a field with no shortage of strong titles, The Yellow King stands out for its elaborate setting and reliance upon the work of Chambers as opposed to Lovecraft. Distinctly more literary than most other modern roleplaying games, GMs and players alike will need to come prepared. The potential scope for a campaign in The Yellow King borders on epic and for players who are committed to an in-depth, long-term experience this is a natural fit.