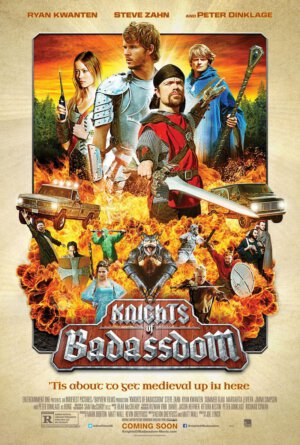 Rated: R for horror violence, language throughout, some drug use and sexuality

One watches Knights of Badassdom with the ever increasing sense somewhere there could have been a decent movie in this mess if the folks behind the production had made up their minds, before the cameras began to roll, what they were aiming to put onscreen. Is KoB meant to be a comedy with horror elements? Or possibly a chiller with some good chuckles added into the mix? Maybe even a love letter to the nearly universally maligned live roleplaying community? Sorry to say Knights of Badassdom can’t make up its mind what sort of movie it wants to be and the end result is a pretty crappy flick.

The film begins in excruciatingly familiar territory; an underachieving main character gets dumped by his girlfriend and his oddball buddies look to snap him out of his doldrums. Here we have Joe (Ryan Kwanten) a mechanic, and sometime heavy metal musician, getting the heave ho by Beth (Margarita Levieva) because he’s a slacker and should be doing more with his Communications degree. Right off the bat you have the impression Beth is a real bitch and you’re scratching your head why a good looking guy like Joe would be overly concerned with getting the boot let alone hooking up with this shrew in the first place. 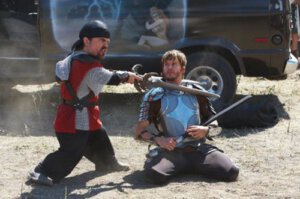 Joe’s LARPing buddies Eric (Steve Zahn) and Hung (Peter Dinklage) decide a return to roleplaying games is just what the warlock ordered to shaking our love lorn mechanic out of his depression. It turns out the friends had some good times rolling dice in the past and now Eric and Hung have graduated to live RPGs in order to get their kicks. While the LARP characters aren’t treated like the typical geeks and sexual outcasts like they usually are on screen – I’m looking at your Role Models – they still play off as one notes; in fact all the characters in KoB are all one dimensional cookie cutter types. While I certainly don’t expect a truckload of character development in a movie like this but, in the great scheme of things, it normally helps if we actually care about one or two of the people we see onscreen.

The first reel of Knights of Badassdom is mainly played for laughs but sorry to say the chuckles are few and far between. For the most part nearly all the humor stems from the archaic language the LARPers use in game and this joke gets staler than a month old mutton chop damn fast. I cracked a smile at a couple of lines but the comedy overall falls flat.

No worries there though because suddenly KoB becomes a horror film rather than a comedy. 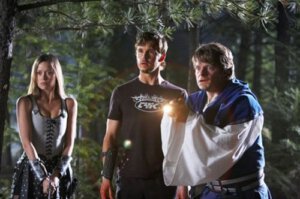 Now our less than intrepid wizards and warriors have to deal with a real demon who has accidentally been summoned from Eric’s mysterious tome of spells. The body count begins to mount and, unfortunately, some of the more interesting characters are offed rather quickly leaving Joe, Eric, Gunther (Tom Hopper), Gwen (Summer Glau), and fussy GM Ronnie (Jimmi Simpson) to battle a Beth lookalike hell bent on, well… I’m not sure what the demon is hell bent on doing outside of killing everyone.

This leads to a rather boring climactic battle in which the body count rockets as our comely succubus is morphed into a phony looking big baddie and proceeds to kill scores of gamers. Plenty of blood flies but all of the horror elements in Knights of Badassdom come across as ho hum leaving one to smile as the end credits begin to scroll – you’ll be smiling because this 86 minutes of crap has come to an end.

While KoB isn’t a bad looking film, outside the laughable end demon, it’s along the lines of putting lipstick on a pig; I’ve seen a whole lot worse cinematography in a lot better films but just because a movie looks alright can’t make up for loads of other problems. The direction is nearly nonexistent, writing hackneyed, and acting rather bland. The acting is especially worth noting because there’s plenty of talent with this cast as we’ve seen great work from Zahn, Dinkledge, Glau, Kwanten, and Simpson on TV or in other movies but there’s just so much of a phoned in quality to all the performances it’s painful to see actors we know are capable of much better end up with KoB shackled to their IMDB pages. 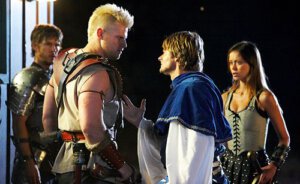 I think my biggest problem with Knights of Badassdom is that for a film which supposedly embraces the hobby of live action roleplaying, and the passion that diverse community has for LARPing, the movie treats the players like nothing more than grist for lousy jokes and cannon fodder for a shitty looking monster. Even though Role Models poked a lot of fun at LARPing that movie at least showed a goofy appreciation and affection for the players. Here we get to watch most of the minor characters, – who’ve been haphazardly introduced earlier in the film – get dismembered, disemboweled, and beheaded. WTF?

What we’re left with is a comedy which isn’t funny, a horror movie which isn’t scary, and a movie which is supposed to dig LARPing but ends up massacring almost every one of the players… Add to this the lousy writing, snore inducing acting, cheesy special effects, and nearly incomprehensible plot and it all adds up to a loser.

It’s easy to see why it took nearly four years for Knights of Badassdom to see the light of day (and mainly I’ll take a stab it’s only due to Dinkledge’s Game of Thrones popularity) as the final product is on the low end of usual straight to DVD dreck people scan at the local Red Box kiosk when everything worth a buck twenty has been rented. I’m sure some readers will give KoB a thumbs up and look to crown the movie with some sort of “cult classic” moniker, mainly because it’s a movie featuring LARPing, but I’ll classify the movie as something else: A steaming pile.

It’s easy to see why it took nearly four years for Knights of Badassdom to see the light of day (and mainly I’ll take a stab it’s only due to Dinkledge’s Game of Thrones popularity) as the final product is on the low end of usual straight to DVD dreck people scan at the local Red Box kiosk when everything worth a buck twenty has been rented.

The Second Time’s a Charm Too: Uncaged Volume 2 Reviewed

Our Favorite Roleplaying Game Releases of 2019

Our Favorite Board and Card Games of 2019