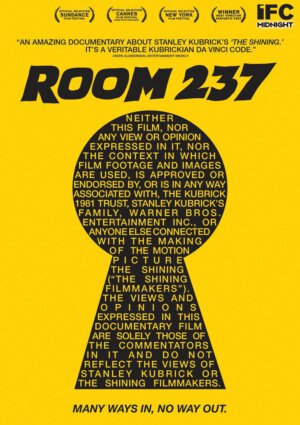 It’s pretty apparent to folks who know me I’m a movie nut and, not only do I dig the finished product projected upon the screen, I’m always keen on learning about what went into the process to create those flickering images which have fascinated generations of movie goers. The writing process, back room deals, on and off set scoops and the like are my cup of tea so when one film comes along which pulls back the curtain on another film it’s a given you can sign me up to watch.

That is, at least, when the curtain being drawn doesn’t reveal a brick wall directly behind it… 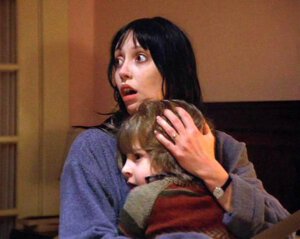 The premise of Room 237 is that director Stanley Kubrick had much more on his plate than simply conveying a tale of isolation and horror when he set out to begin filming his adaptation of Stephen King’s bestselling novel, The Shining. Rather than a behind the scenes look at all the turmoil which went into the production (endless retakes and rewrites, obsessive attention of detail, Shelly Duvall’s near mental collapse, etc) of a film famously despised by the original material’s author we’re taken on a mercurial ride down the rabbit hole of increasingly insane movie fanaticism.

Room 237 is broken down into nine segments in which five so-called experts individually reveal their own fantastical beliefs into the “true” meaning of Kubrick’s 1980 horror masterpiece. We never glimpse the talking heads on screen as we’re introduced to the audience at the beginning and then never identified again; I believe partly as a creative decision by the documentary’s director Rodney Ascher and, much more likely, mainly so most of the narrators won’t be laughed at and pelted with garbage when they show their faces in public…

Is The Shining Kubick’s thinly veiled apology for personally faking the Apollo 11’s moon landing footage? Was Kubrick exploring the genocide of the Native American population?  Can we take the horror film as commentary regarding Nazism and the Holocaust? Is there an overt sexuality running rampant through The Shining? Maybe the flick is simply an exploration into the impossible? I’ll stop there because these theories and more are vomited at a pace leaving little chance to catch your breath from one opinion to the next. 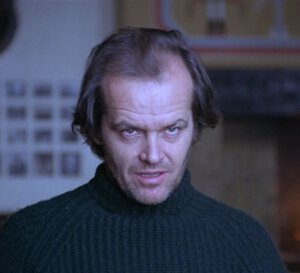 The conspiracies (and the reality is the narrators opine conspiratorially for some reason) range from the nearly believable, “Hmmm… That does make a bit of sense, I suppose,” to “Holy Snikeys! That dude is batshit crazy!” The issue here is Ascher presents each theory with equal validity, with an approach reminding one of an adult dumping a bucket of Legos onto the floor in front of a child; “Here you go, now make what you will out of the mess.” This isn’t to say Room 237 isn’t interesting viewing though if you approach the film with the right mindset.

For myself the Room 237 is more about obsession – film obsession in particular – in which an individual’s mind sees what it wishes to see and justifies that wish by filling in the blanks with endless prop and backdrop minutia and half-baked theories about the artist’s motivation during a film’s creation. It’s pretty well known Stanley Kubrick was a taskmaster with his own obsession to painstaking detail and framing yet I find it hard to believe the director was anal enough to pace and edit The Shining so it syncs up while running simultaneously forward and backward is farfetched to say the least. Or that a continuing reference to the number 42 throughout his film reflects a near subliminal condemnation of Nazism and the Holocaust borders on the near ludicrous. The fact there are people who believe Kubrick invested untold time and energy into inserting hidden meanings at every turn of The Shining turns out to be more interesting than the possibility any of the narrators’ theories are correct.

Technically, Room 237 is a real mishmash as much of the film is made up of scenes from The Shining, and other Kubrick works, overlaid with amateurish commentary sometimes sounding as if recorded in the speaker’s basement. Room 237 strikes me as more of a personal film project than a finished documentary and, while I applaud Ascher’s objectivity – a trait sorely missing in most documentaries of late – the director’s stance of presenting each theory with equal validity detracts from the overall effectiveness of his film; the nearly plausible mixes with the batshit so often the viewer walks away from Room 237 with the impression everything presented is a crock. 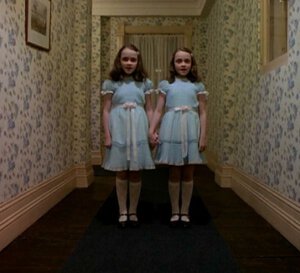 Yet the movie is still immensely watchable, especially for anyone who has endlessly obsessed over a particular film at one time or another. While you might chuckle at the fact anyone still adheres to the belief millions glued to their televisions back in 1969 were watching a Kubrick helmed production there’s still enough interesting, more rational tidbits to keep the viewer entertained. One thing’s for certain: If you give Room 237 a watch you’ll surely never see The Shining in the same light again.

On a side note, the Bluray/DVD comes with some additional features including deleted scenes (Room 237 is long enough so you might want to take a pass on seeing what didn’t make the final cut), “Secrets of The Shining: Live from the First Ever Stanley Film Festival,” a discussion which includes long time Kubrick assistant Leon Vitali, a discussion with artist Aled Lewis regarding The Shining Mondo movie poster design, as well as most of the usual trappings such as trailers, additional commentaries and so forth. The discussions with Vitali (as he shoots down every conspiracy thrown at him) and Lewis (let’s talk about really adding subliminal messaging to a poster) are nearly worth the price of admission alone.

The movie is immensely watchable, especially for anyone who has endlessly obsessed over a particular film at one time or another.

A Bounty of Adventure: Abzu’s Bounty for The Expanse RPG Reviewed

The Second Time’s a Charm Too: Uncaged Volume 2 Reviewed

Our Favorite Roleplaying Game Releases of 2019