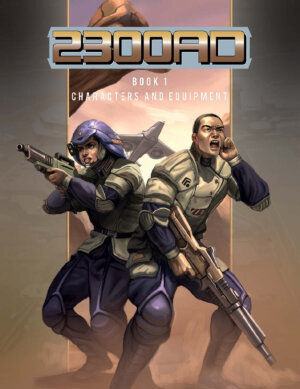 2300AD is an alternate setting for the Traveller system and is stand alone from the Traveller Imperium universe. It is a more realistic setting such as there is no artificial gravity or energy shields to protect ships. Each world has its own challenges from allergies to gravity. The box set contains three books; Book 1: Characters and Equipment, Book 2: The Worlds of 2300AD, and Book 3: Vehicles and Spacecraft. This review will look at Book 1: Characters and Equipment. Groups will still need the Traveller Core Rulebook Update 2022 to play the game as the box set is for setting rather than a stand alone game. The boxed set references other supplements such as the Robot Handbook, Ships of the Frontier, Tools for Frontier Living, and the Aerospace Engineer’s Handbook. A few of which are not due to be out for a few more months. The art has the style found in the corebook.

As the name implies it is set in the year 2300AD. The technology level goes up to TL12 for cutting edge military hardware. Humanity is scattered on 57 outposts on 32 worlds which include the core world systems (Earth and Alpha Centauri). There are six intelligent alien species that humans have encountered. Those species are described in Book 2. 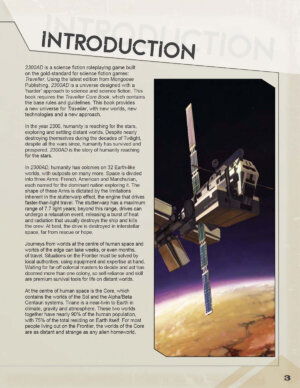 Traveller character creation has been modified to travellers in this setting. This includes careers, skills and mustering out. An appendix at the end of the book gives details on creating character’s from the core world though the front of the book assumes players will be from the frontier. Nationality and homeworld plays a roll in where characters start and their life paths, which can be found in Book 2. Players must choose between a hard path (technological) or soft path (genetic alteration) for their traveller. The hard path provides better mustering out benefits, while the soft path improves survival during their careers but at a reduced mustering out benefit. Travellers can get prosthetic replacements should they become injured in lieu of a benefit roll.

The rules following character creation deal with augmentations. These include cyberware, DNA modifications, and symbionts that make the traveller “more” than human. Groups familiar Cyberpunk 2020 or Shadowrun will find similar types of cyberware such as limbs, eyes and ears. However, those groups looking for human augmentations or transhumanism at the level seen in those other games will be disappointed. Modifications are looked down on and may have legal and social implications for travellers.

The bulk of the book is gear, weapons, and armor. The gear is mostly man portable with a few heavier items such as an entire solar array. The weapons vary from melee to crew served weapons. The weapons have details such as dimensions, actions, ammunition type, muzzle velocity, etc that are interesting but do not impact game play. The armor types go from armored clothes to full military body suits. Overall, the gear variety is sufficient for most gameplay. The book recommends groups add additional gear from other Traveller publications if it is needed.

The final section of the gear deals with robots, drones, and dolls. Robots can be autonomous, but follow their programming. Drones are remotely controlled. Dolls are androids that are robots, but the book hints they tend to become self aware after a few years. Groups that will use the Robot Handbook will find a page on how to adapt costs and sensors for the 2300AD setting.

2300 AD Book 2: Worlds of 2300AD is the second of three books in this box set. Groups will find a brief description of about 30 worlds and their associated colonies in this book The artwork is mediocre without any piece grabbing or inspiring the reader. Organizations, intelligent species, animals, and templates for NPCs are provided after the world descriptions.

The first section describes the history of 2300AD. The original story of 2300AD is a continuation Twillight 2000, but this connection between the two games has mostly been hand waved by saying the records from 1995 to 2070 were lost. The history starts in 2079 with France reestablishing contact with the rest of the world. Over the next century humanity colonized Tirane (Alpha Centuari) in 2144, and Earth was left with nation states defined by their colonies off world. Humans made first contact with the Pentapod alien race in 2051 and established contact with the other 5 races over the next 48 years. This sets the stage for the conflicts between the Core and Frontier worlds and the war between humans and the alien Kaefers. 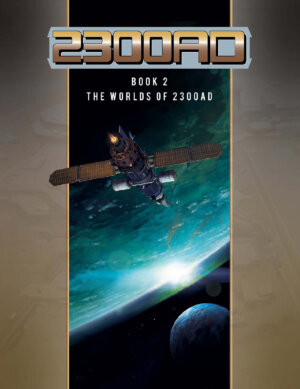 The Frontier section is broken into three arms and the core worlds of Earth and Tirane and then the frontier worlds on the three arms (American, Manchurian, and French). Each planet is given a brief description, a minimalist map that identifies the primary colonies and major land features. The world descriptions have gravity, locations, distance from earth, the UPP code with colonies having their own individual codes (UCP). Survival Difficulty Modifier and the Environmental Hazards and Requirements are the primary in game mechanics for the world.

The core worlds are basically surveillance states that try to keep humanity in its original state but use technology to survive (Hard Path). Many frontier worlds are much harsher, but freer and typically use DNA modifications (DNAM) and symbiotes to survive (Soft Path). There is a chart for each colony specifying which path character’s are allowed to take and the nationality of the colony. Groups looking for detailed descriptions of each world and major NPCs will be disappointed, but they give a seed for referees to flesh out.

The chapter after the worlds deals with the organizations. These include corporations, terrorists, scientific foundations, and the military. The goals, numbers, and rough capabilities are given for each. However, like the worlds they are bare bones descriptions and will require a referee to give them depth.

The animals and aliens section gives dedicates about as much space to each alien as those in the Traveller Corebook. Ebers, Pentapods, Sung, and Xiang are friendly to humans. The Kaefer are enemies to mankind. The book details Arbors, but they seem more of a curiosity rather than making them an interesting race to be encountered. The animals and terragens (of earth origin) are provided with brief descriptions and statistics for a referee to throw into an encounter.

The final section of the book has a few pages for campaign ideas and themes. The campaign suggestions are about half a page each with a few starting ideas. The section ends with a calendar of 2300 and its major holidays.

2300 AD Book 3: Vehicles and Spacecraft is the last of three books in this box set. The first quarter of the book has a couple of dozen vehicles ranging from civilian motorbikes to military hardware such as planes and walkers. Each vehicle has its own artwork. There are rules for vehicle options to be used with the Vehicle Handbook and weapons that include anti-missile systems, bombs, and plasma guns for tanks. 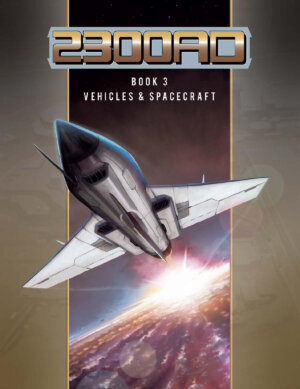 The rest of the book deals with spaceships. The first parts deals with the physics of starships and planets. This section details with orbital operations and distances for how far ships can travel with stutterwarp drives. Groups that like logistics and mathematics will enjoy this section. However, much of it can be hand-waved with a description with little being lost. There is a modified space encounter table from the Traveller Core book at the end. It is nice that a setting specific encounter table was included, but more tables would be welcome.

Starship combat has been greatly expanded. Each crew member is given a set actions they can perform and the associated skill with those actions. This ensures each player will be kept involved in the combat rather than having a only one or two characters monopolizing the action. A captain can give a command, which will give bonuses to other crew members if they follow the captain’s order. A sensor operator can improve a critical by a gunner. The pilot can improve the gunner’s chance to hit. Overall there are eight different crew roles and five different roles maybe involved in a single weapon attack. The only issue is it can bog down a game with so many rolls and options for each position. The end of the chapter includes a modified critical hit table, a variety of equipment, and weapons for starships.

The last part of the book includes interface craft and starships. The typical detail one would find in the corebook such as cost, equipment, crew, hull points, etc. are found for each ship. Each has its own art and includes a map showing the inside of the ship and its various decks. Groups looking to create unique ship will need to use the 2300AD Aerospace Engineer’s Handbook, but for standard designs this will provide common ships seen in the 2300AD setting.

TGG REVIEW
8 TGG SCORE
0 VISITORS' SCORE (0 votes)
Summary
It's important to note this is not a stand alone product and one needs to the core Mongoose Traveller 2E (or Traveller 2E 2022 Update) rules to utilize the set. Groups who enjoy an Expanse style roleplaying setting will more than likely appreciate this boxed set; especially with its hard science fiction focus. Those looking for a Star Trek, Star Wars, or any sort of far flung space opera experience will no doubt seek other settings.
REVIEW SCORE
What people say... Leave your rating
Sort by: