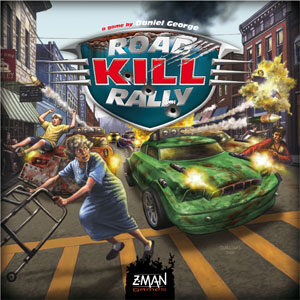 To start with, the theme of Road Kill Rally certainly will not appeal to everyone. I reviewed this on episode zero of the podcast but wanted to include it here because we’ll be posting written reviews from the last show just as the next show becomes available. Anyway, the game is set in 2040. Television networks, in order to compete for ratings, arrange what are known as Road Kill Rallies. These Rallies feature modified vehicles blasting away at each other with guns, missiles, flamethrowers, and so on. Unfortunately for them, spectators are often innocent victims, but they count as scoring in the Rallies so the more death and destruction? The higher the racer’s score and the network ratings! 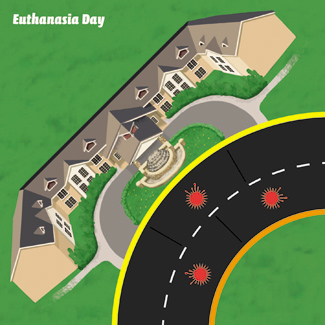 I’ll point out right up front if you think running over people, including little old ladies with walkers and kids bouncing basketballs, isn’t your cup of tea you might want to take a pass on this game. If you can see the humor and satire in the classic 70s film Death Race 2000 and used to play Car Wars whenever you had a chance, Road Kill Rally might be right up your alley.

As we’ve all come to expect from Z-Man Games, the components are really great. The game includes five boards for tracking information about your car, a stack of race tiles for creating the course, a load of counters for scoring,  plastic miniatures of the cars and pedestrians, a set of unique dice, and two decks of cards. And before you ask, yes, there are baggies for all the goodies.

You set up the game giving each player a tracking board and miniature to represent their car. You also deal everyone seven rally cards and eight accessory cards. There is also an option whereas each driver gets a skill card which gives them a special ability. The rally cards are used for actions as well as ammunition for your weapons – I’ll get into that more in a minute. The accessory cards are used to modify your car into a speed demonized weapon of mass destruction. Each player selects three cards to outfit their car; one weapon, one special ammunition, and one armor/body modification. 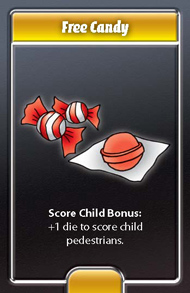 The accessory cards feature some pretty heavy duty weapons and they really really add to the games replayability. In one game you could be using an anti-tank gun with armor piercing rounds and an explosive bumper while the next you might have a flamethrower with napalm ammo for you to toast those marshmallows who get in your way. There are a lot of combinations, and you have a few opportunities in the game to re-configure your car if your current set up isn’t working.

The rally cards provide a large number of instant effects which players use throughout the game. Cards can provide additional dice to use during an attack, protect you from damage, or cause some downright nasty things to happen to your opponent. The rally cards also have ammo symbols which are used to you’re your weapons. 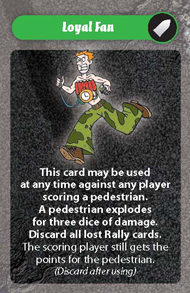 Every player, beginning with the player running the race in first place, performs each action before moving onto the next action. So all players draw cards, then they set speed, and so on.

The number of cards the player holds in their hand is very important. When a vehicle takes damage the owner must discard cards from their hand. This of course can be reduced by armor or special cards. If at any time the player can’t discard to absorb damage they “wipe out”. This results in a -20 hit to Victory Points (Ouch!) and the vehicle immediate slows down to 20mph. You never “die” in the game, although if you have more than 3 wipeouts you can no longer mod your car later in the game. There is an optional rule where three wipeouts know you out of a race. This can make things mighty nasty but also presents a faster playing game.

After drawing cards, each player sets their speed by accelerating or decelerating as within certain limits. Similar to Formula De, you incur higher risks to your car the faster your speed when going around turns. The player’s car tracking board shows speed and, based on the color code of the turn, how many dice they must roll for each colored space they move through. Players can even ram another racer which could cause damage to both players. This sometimes happens unintentionally because of wipeouts.

Let’s talk about the “splat dice” Each die has three blank sides, Two “1 splat” sides, and a single “double splat”. Each splat represents 1 hit to your car (or against a target). Additionally, if the double splat is rolled you must also roll another die which can cause more hits! Wee! There’s so much mayhem!

As the lead car moves off of the starting race tile they reveal the next race tile. Each tile has random effects or various targets. Examples include a forest fire which makes cars immune to attack, a farming tile complete with a giant chicken trying to cross the road, and a house full of cultists. The tiles are drawn at random so the course is different every race. (There is a rumor that expansions are already being talked about for more tiles.)

After moving, players may fire any weapons they have or in some cases modify their cars by swapping out accessories if they perform a pit stop. Each weapon has three stats: ammo, dice, and range. To activate a weapon, you typically must discard one or more rally cards for ammo. There is a line of sight element because you can’t see opponents’ cars around curves and in many cases you can’t shoot beside or behind your car. Assuming the opponent (or pedestrian) is in range you then roll the specified number 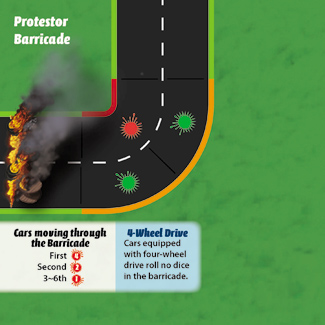 of dice to hit your target. Each splat results in a hit against your opponent which scores you points. If you cause your opponent to wipe out, you also get the cards they would have discarded.

On many of the race tiles you’ll also find targets …of the human variety. These range from little old ladies crossing the street, to kids playing basketball, to unfortunate blokes who are in the wrong place at the wrong time. When a player enters a space with a pedestrian, they roll a die in an attempt to run over the pedestrian (adding any modifiers for accessories or one additional die for each rally card they discard). If they score 2 splats, they pick up the miniature representing the pedestrian and place it in the kills section of their tracking card to score even more points at the end of the game.

Additionally, as I briefly touched on, if you have line of sight you can shoot a pedestrian during the combat phase.

Accessories such as the Psychopathic Driver and Roto-Blades are especially deadly against pedestrians by giving you a bonus die to use.

The game ends when the finish line tile is revealed and 3 players cross the line. There are bonuses for finishing in the top three in the race. Players add up their points what place they finished the race, hits on other opponents, and pedestrians killed. You also subtract 20 points for each wipeout. 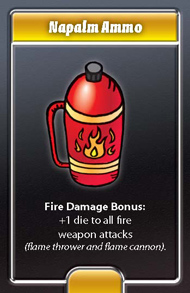 So who’s going to like the game? Well, the theme is either going to appeal to you or not; no getting around that one. Running over the little old ladies (complete with walkers) will turn some people off. But if you don’t take board games too seriously, and you can see the humor in just about everything involved in Road Kill Rally, this is a game that can be a real blast!

The game has a Formula De element as you must carefully manage your cars speed and control along the course. The damage system is rather simple which makes the game play really quickly with a minimum of downtime.

The endless combinations of armament, toys, and cards make replayability high. Keep in mind the game is a dice fest so luck is a major factor. There is no doubt that any expansions that come out will increase the number of possible combinations one could make to their car as well as offer even more road tiles.

For me, seeing I come from the side of the aisle that gets a kick out of Death Race 2000 and Car Wars, Road Kill Rally is right up there as a must buy!

TGG REVIEW
8 TGG SCORE
0 VISITORS' SCORE (0 votes)
Summary
The theme is either going to appeal to you or not; no getting around that. Running over the little old ladies (complete with walkers) will absolutely turn some people off. But if you don’t take board games too seriously, and you can see the dark humor and nods to the cult film Death Race 2000 in just about everything involved in Road Kill Rally, this is a game that can be a real blast!
REVIEW SCORE
What people say... Leave your rating
Sort by: