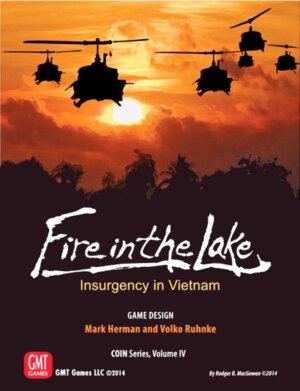 Game Name: Fire in the Lake

I have to admit I’m a bit too young to remember many of the events of the Vietnam War as they happened; I was in 2nd grade when Saigon fell so that’s a fuzzy memory but as I became interested in history, while I was in high school, I did quite a bit of reading about the war. To this day I still believe I have a pretty good handle on what took place, not only from the 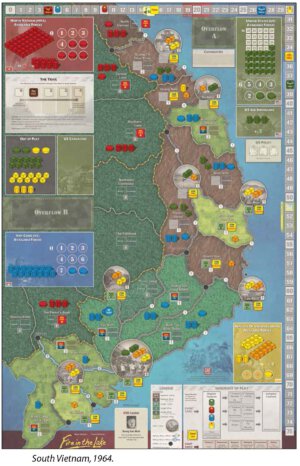 U.S. perspective but that of the communist foes as well. That’s why I’m usually disappointed with most wargames which tackle the Vietnam War as a whole, mostly because the designers focus solely on the military aspects of the conflict – mainly in a typical WWII style of two sides duking it out – while paying little attention to the actual guerilla style of combat or political realities of the time. And, don’t get me started on those titles which presented the U.S. player with the nuclear option either! Oh boy… I’ll admit the old Victory Games title Vietnam was pretty good but still played out too closely in the vein of traditional hex based games.

Until Fire in the Lake I thought it was probably near impossible to design a game which would capture not only the fluid, unstable, seesaw nature of the Vietnam War but also the political and logistical realities of the combatants. Add to this the fact the Vietnam War still resonates strongly with Americans and some folks feel making the war the subject of a game is inappropriate or down right disrespectful. My personal thoughts are if a designer is able to present the conflict in a realistic and thought provoking way not only can a game provide an evening of strategic challenges but become a learning experience as well.

Fire in the Lake (titled after Frances FitzGerald’s Pulitzer Prize winning book Fire in the Lake: The Vietnamese and the Americans in Vietnam) is the fourth release in GMT’s COIN series and is by far the densest and most complex to date. This isn’t a knock by any stretch but important to note for those who breeze along through Cuba Libre in a few hours. While experienced gamers will eventually get playtime down to around three to four hours for the medium length scenario, you’ll certainly want to set aside at least five hours or more the first time you get into a multiplayer game. Three scenarios are included with one covering 1965-67, another 1968-72, and the final full game running near the full gamut of the war from 1965 through 1972’s Paris peace talks. 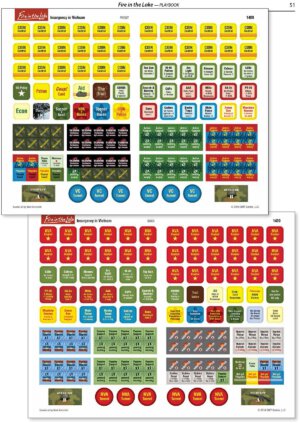 Once again it goes without saying GMT has rolled out top notch components for this release, as we’ve come to expect. Included within are a study mounted map, loads of wooden pieces, nine play aids, both the rulebook and play book, as well as 130 cards which drive the game to a great extent. It’s always a good idea to sleeve those cards since I can see Fire in the Lake (FitL) becoming a go to game for those who are looking for a solid afternoon of strategy. All in all you surely won’t feel cheated when you open the box!

As with GMT releases which include one, the play book is especially useful. Along with designer notes from Volko Ruhnke, Mark Herman, and Örjan Ariander you’ll find an in depth tutorial walking you through seven turns of gameplay. Of special note is the section detailing each of the Event cards and their historical context as well as tips on how to play those cards.

As with many games which involve a lot of heavy mental lifting, I’ll stick with a high level look at FitL as opposed to bogging down in the minutia of the game rules. For those familiar with other titles in the COIN series many of the core elements of previous games are still present; players can utilize the cards either for Operations points or for the event depicted on the card, only two of the four factions may be active in a given turn with the two inactive factions performing actions or events the following turn; turn order is determined by cards as opposed to a set sequence. The game is asynchronous as all the factions play differently and possess different victory conditions. 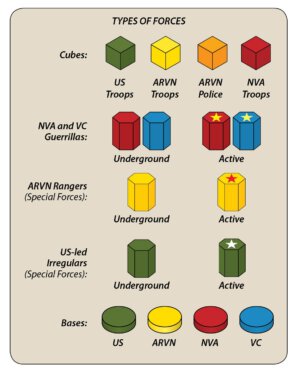 Fire in the Lake pits the North Vietnamese Army (NVA) and Viet Cong (VC) against the Army of the Republic of Vietnam (ARVN) and forces of the United States (U.S.). While one would think the breakdown of the opponents would pit two against two, the reality is there can only be one winner in FitL; each faction is looking to complete their victory conditions. Obviously, each faction doesn’t work openly against their ally but they certainly aim to further their cause even if sometimes this is to the detriment of their ally’s goal.  Jumping to a runaway lead early on in FitL only leads everyone at the table (ally included) to try and pull the frontrunner back to the pack.

In essence Fire in the Lake is an area control game fueled by players playing historical events and performing a variety of operations aimed at furthering their faction’s goals. The U.S. is focused on creating support for the South Vietnamese government while keeping American men and material out of Vietnam while the South Vietnamese aren’t overly concerned with “hearts and minds” but more so in controlling the populace and keeping their government in its current rather corrupt. On the other hand, the North Vietnamese Army looks to unite the Vietnamese people in a Communist regime while the Viet Cong aim to foment opposition and gain a foothold in nearly every corner of Vietnam.

I certainly think Fire in the Lake is a fantastic game but it’s important for readers to know this isn’t a light game by any stretch. Even if you have experience with other COIN titles, FitL will take some time for everything to click.