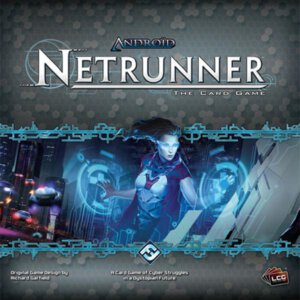 Category: Two player card game of attack and defense set in the cyberpunk world of Android

“Android: Netrunner is a two-player Living Card Game set in a dystopian, cyberpunk future where monolithic megacorps own and control the vast majority of human interests. While corporation players try to score points by advancing their agendas, they have to guard their intellectual properties from the elite and subversive hackers known as netrunners.”

“While the LCG Core Sets provide a fantastic stand alone game experience, those that wish to can expand even further! Monthly installments of expansion packs, each a set of fixed cards, provide ongoing and regular additions to the available card pool. These expansion packs add customization, variety, and an ongoing sense of theme to your experiences with the Core Game, while evolving the play environment in exciting new ways.”

Android: Netrunner is a card game with two roles to be played with each role playing very differently from the other. One player is a Runner (computer hacker) and the other is a corporation. The Runner is trying to steal agendas worth varying points from the corporation while the corporation advances them to score. The first person to score seven points wins. The Runner can also lose by having to discard and having fewer cards than required; they’ve Flatlined. If the Corporation is forced to draw a card from the draw pile, and there are none available, then they lose.

Theme is everywhere with this game and it draws you into the world. The artwork is representative of the Runner factions showing implants and cables coming out of the hacker’s bodies. The Corporate factions have the all muscle and futuristic equipment of the business world. The runner builds his computer rig by installing Programs, Hardware and Resources. The corporation uses Ice, Upgrades, Assets and Agendas.

Each player takes alternating turns, the Runner installs cards face up and the Corporation face down. Both players start with five cards and five credits; credits being the currency used in game. The Corporation goes first and has three clicks (or actions) to use during his turn. All three clicks must be used each turn and the following actions may be used as many times as the player has clicks – as well as credits – to perform them: Draw a card; gain one credit; install an agenda, asset, upgrade, or piece of ice; play an operation; advance a card; trash a resource in the Runner’s rig if the runner is tagged; purge virus counters (using all three clicks); or trigger a click ability on an active card. The Runner has four clicks to use on his turn. He may draw one card; gain one credit; install a program, resource or piece of hardware; play an event; remove one tag; make a run on a server; or trigger a click ability on an active card.

Ice and Ice Breakers are at the heart of Android: Netrunner. Ice is used to block the runner’s attempts when they make a run on a server where the cards are installed. The Runner uses Ice Breakers to – surprise – break through the Ice. Ice has varying costs to Rez (activate) and strengths. Once the Runner has matched the strength of the Ice by paying credits they move onto the Subroutines. Subroutines can cause Net or Meat damage (randomly discard from the Runner’s hand) to Ending the Run on that server.  Once the Runner has gotten through a piece or pieces of Ice they may access the installed cards. This is where a bluffing aspect of the game comes in. The installed cards can be Agendas worth points, Assets which are bad for the Runner or Upgrades to that server.

There are four Corporation factions and three Runner factions included in the base set. Each faction has a different feel to the way they play. You can also use cards from one faction in another faction by spending Influence points. Cards that can be used have an Influence value marked on them. With a limit of 15 points you can’t go wild and leads to decision making becoming all the more interesting.

Android: Netrunner is more about the players then the cards. What does the Corporation have installed? Why is the installed card not protected by a piece of Ice? Why did the corporation not Rez that piece of Ice? Is it a trap which could damage the Runner and end the game? Does the Runner have a Program to break the type of Ice I have installed? Will the Runner have enough Credits to get through the Ice? Do I want to Rez the Ice or save my Credits for the server with the Agenda?

This is the first game that has captured my attention to the extent that I have a standing order with my Friendly Local Game Store for anything that is released for Android: Netrunner. You don’t have to buy anything but the base set and you will have years of gaming fun.

This is the first game that has captured my attention to the extent that I have a standing order with my Friendly Local Game Store for anything that is released for Android: Netrunner. You don’t have to buy anything but the base set and you will have years of gaming fun.